Topics include Transportation, Things to Do, Dining Scene & more!

Each bank note and coin denomination has a distinctive size, shape and design.

Bank notes are issued in five denominations: $5, $10, $20, $50 and $100. It is common to find notes of any denomination being used in daily transactions, even the $100 note, but its use is less common and smaller stores might refuse to accept such a high denomination for small purchases. Each denomination is a different principal colour and each has special security features to limit counterfeiting. 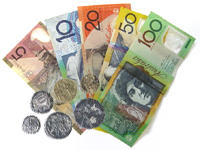 All notes are sized according to their denomination for the visually impaired. They are the same height but different lengths, in order of their value ($5 being the smallest, $100 the largest).

Because of the aim to be cutting edge, counterfeits are rare and there are easy ways of checking. All Australian bank notes have a clear plastic "window" in the bottom right-hand corner of the note, and the larger denominations ($20, $50 and $100) have the value embossed on to this. Every note also has a seven-pointed star which has only half the printing on each side - hold it up to the light to see that it is genuine. There are other security features, but these should be more than enough.

Coins for circulation are issued in six denominations: 5c, 10c, 20c, 50c, $1 and $2. All denominations are in  regular use. Some vending machines, other coin-operated machines and some other places (such as some toll booths) no longer accept 5c pieces as a method of payment.

Like bank notes, coins differ in size, shape and design. All coins have an image of Australia's Queen Elizabeth II and the words 'ELIZABETH II AUSTRALIA [YEAR]' on the obverse side.

There are no   colloquial names for different coins; people  refer to 'pieces' - '5c piece ' etc.

Due to the unfavourable rates, usually coupled with fees and/or commissions for exchanging money at currency counters, it is recommended that you withdraw money from ATM machines, as needed, preferably using a bank affiliated with your bank when possible.  Exchange counters are everywhere, say in Sydney for example.  The rates at the Sydney Airport are the most egregiously lopsided in their favour, but most "buy" notes for 3-6% less than market value and sell for 3-6% more than market value and then add a fee/commission of $2.50-10.  If you use, say Westpac Bank, and are a Barclays customer, there are no fees and the exchange rate pretty closely tracks the market price.  Same for Citi customers, who will find Citi ATMs easy to spot.

Two additional benefits: (1) you can carry around less money while travelling; and (2)  you only "exchange" the money you need and are not left holding a bunch of Aussie Dollars you cannot use, which you will most likely be selling back to a currency exchange at a discount on the last day of your trip.

ATMs are VERY reliable at dispensing their notes, but always check that you have taken them all. Some older ATMs dispense the notes in two lots, $20 and the $50, so always make sure you've got the right amount!

ATMs are numerous in both city and country areas. ATMs in the walls of buildings on streets and inside the lobbies of banks, shopping centres and other buildings are numerous. At night, service stations and convenience stores are good places to look for ATMs away from the street. Pubs, especially in city areas, will usually have an ATM located on the premises. Some ATMs may require you to swipe your card to gain entry to a secure area.

Banks are normally only open weekdays 9.30-4pm Monday - Friday, some stay open until 5pm on Fridays. Bank staff stick to these times rigorously, so don't be late/early

Australian banks are allowed to charge non-customers a fee for using their ATM machines (usually around $2 per transaction). This fee is charged regardless of whether your bank charges you for using another bank's ATM (although, now, in Australia it is less common for banks to charge you for using another bank's ATM). For tourists, this can mean that they are charged twice for an ATM transaction: once by the Australian institution and then once again by their own bank at home.  Do note that many ATMs do not charge fees for users from certain partner banks, e.g., WestPac Bank is partnered with a number of banks, including Bank of America, which allows you to withdraw money without any fees on either end of the transaction.  There are also many Citi Bank ATMs, so customers with Citi accounts should not be charged either.

Australia has an almost universal acceptance of electronic payment - the EFTPOS (Electronic Funds Transfer at Point Of Service) network allows people access to their Savings and Cheque accounts, and most allow access to Credit purchases as well. Unlike credit purchases, Savings and Cheque purchases can be of any amount, although generally it is preferred to be over $10 per transaction as the shopkeeper pays fees for each transaction and may set limits on minimum amounts purchased. Some establishments also charge fees for use of their EFTPOS facilities - restaurants and taxis charge around 1.5% for Visa and MasterCard and up to 3% for American Express. They are required to notify you of this, but this can mean a tiny sign that you are supposed to mysteriously know about. It is not considered impolite to ask, however. Also note, that the transaction company handling the transfer will be charging in Australian Dollars and may provide an instant exchange rate from your bank's country of origin.  In many cases, the rate of exchange charged is favourable to the bank and unfavourable to the customer.  For example, you buy something for $100 Australia Dollars, but the transaction will charge you $109 NZ Dollars, even if the current exchange rate is closer to $106.

Note that overseas cards may not be able to use EFTPOS facilities and a credit transaction will be required.  Credit cards in Australia more and more use PINs rather than signatures-on-paper.  An American with a credit card may be confused when asked to "enter your PIN number" but it is not really a problem.  The card-reader machine will output a written instruction to the shop assistant to take a signature instead.

Traveller's Cheques are not generally accepted as an alternative to legal tender, except by prior arrangement, and generally only by major hotels. Tourist areas have Bureax de Change/Cambio money exchange points, but any bank should be able to change limited amounts of them. In the CBD areas of capital cities, the principal branches of the large Australian banks (the Commonwealth Bank, Westpac, NAB, ANZ) should be able to exchange large amounts of travellers cheques.

If you are stuck with no cash and only traveller's cheques, and the banks are closed, you may be in for a tough time. People generally don't take IOUs and even then without some form of security - a mobile (cell) phone offered to the shopkeeper as security that you can come back for once the banks are open and you have the cash is probably the only way you can avoid an embarrassing situation.

Here are a few links to some financial information for Perth, Western Australia. The great majority of the information is valid across Australia with some address changes. The links are Banks and Banking , Currency and Credit Cards.