We have decided for this first time to try the Ski in China, and we choose to stay in Clubmed Yabuli, located in the north of China.
On the top of all, I would like to say that going that club you will really feel the true Ski atmosphere!
Cheese raclette, Cheese fondue, chocolate fondue, mulled wine, foie gras, this a a very fast summary of the food you will find there! Buffet is good and really feel the mountain ambiance.

The domain is not super big 55km of slope, but it's nice a fully white!
Room is ok we took a suite, it was spacious and comfortable.

The team is really awesome and always listen to your needs!

For the ski rental, if you are experienced skier better to buy or take your own equipment, the rental is pricey.More

Show less
See all 751 reviews
Payments made by partners impact the order of prices displayed. Room types may vary.
Nearby Hotels 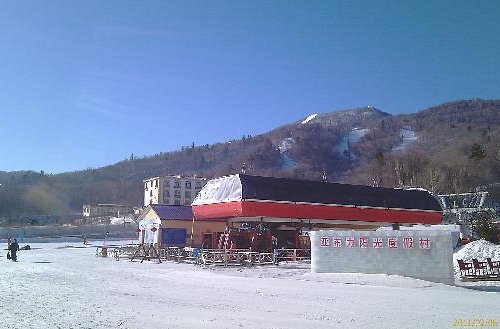 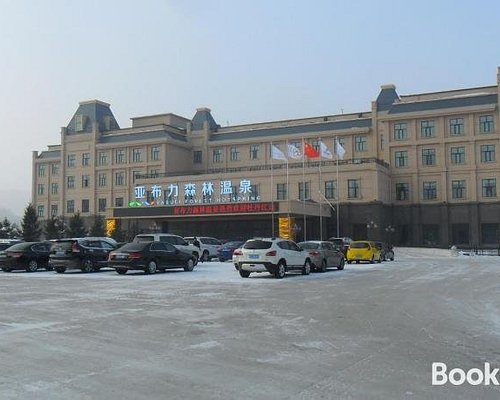 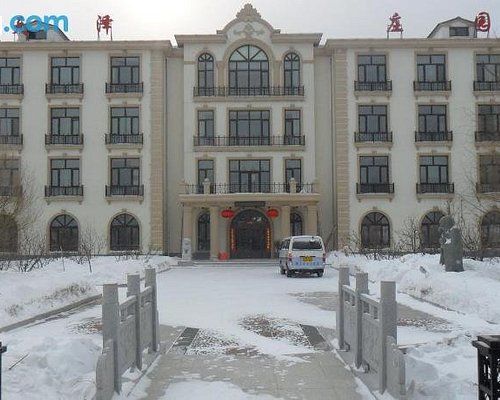 Thanks to Lasia, Hugo, Olivier, Gilles, Guillaume, Jupiter, Martin and all the others, our stay was super smooth and we really feel the spirit of Club Med from each and one of G.O.

As for ski, the weather is mostly sunny but it can be quite cold when there is wind.

If you want to go in a ski resort with worryfree service, and also like to talk to interesting people, Yabuli Club Med might be the best choice.

Hope to come back soon

This review is the subjective opinion of a TripAdvisor member and not of TripAdvisor LLC
cjduhon
Beijing, China
84
Reviewed 5 January 2021
Excellent food and the service you would expect at Club Med

We just spent 4 nights in Yabuli. A nice way to end 2020 and get off to a fun start for 2021. We were there with 3 other expat families, all of us coming from Beijing.

- Getting there / Arrival / Check-in: We decided to take a sleeper train from Beijing (T17). Departed Beijing Central station at 1640 and arrive in Yabuli the next morning at ~0930. It was our first sleeper train here in China. ~17 hours. Overall, we'd definitely do it again, particularly when the timing worked out so nicely. Go with Soft Sleeper ticket, or don't take this option. We pre-arranged the transfer from Yabuli station to the resort. The driver was there when we arrived, and we made it to the resort in just under 30 minutes. Our rooms were not ready for check-in before lunch, but the staff took our big luggage for us, and we were able to explore the facilities and hang out until lunch. Since our departure plans required us to leave before lunch on our departure day, we were able to enjoy lunch on our arrival day for no additional charge. Frank (Front Desk Mgr.) was very helpful and accommodating to our group. After a relaxing lunch, Frank got in touch via WeChat to let us know our rooms were ready (around 1330).

- Food: We ate all of our meals in the Apple Garden restaurant. I was expecting to become a bit bored, but that was not the case. Full credit to their menu variety and quality. Across our whole group, I think everyone was surprised with how consistently good the food was. It is quite a spread, with something for everyone. The hours for the Apple Garden were set for each meal, with 2 to 2.5 hours for each meal. There was also almost always some "snack" set-up near the Forest Bar (the social hub of the resort). The 6PM set-up was something we would check out with a drink, then head to a later dinner after 7PM. There is also a Hot Pot restaurant, but it requires reservations, and we just didn't care enough about eating there to fix plans, so we skipped it.

-Bar: As one would expect at an "all-inclusive", they have a menu of offerings that are "included", and another menu of "top-shelf" selections that they are happy to serve you for an additional charge. The included options were more than adequate, with a good range of standard liquor, house wines, and Chinese beers. The Aperol Spritz seemed to be particularly popular (not a fan). The bar also has mocktails, coffee, tea, and kid's drink.

-Gym / Pool / Jacuzzi: The Gym is clean and simple. 2 nice treadmills, 2 stationary bikes, and 2 ellipticals (1 was "under maintenance). Also some barbells and a 3 station "universal" machine. The equipment seemed relatively new. I only used the treadmills, and they were perfectly adequate. Gym is accessible 24 hours, but when I went at 6AM, I could not find the light switch. Still, there was enough light to use the treadmill. For the pool, the hours were 10-12, then 1400-1700. You enter the pool through changing rooms (one for women, one for men). The changing room areas also have steam rooms and saunas, in addition to the lockers, toilets and showers. The pool looked to be about 20M in length. One swimming lane, and open area for swimming. Didn't see many people in the pool, but the temp was fine for swimming. The best feature was definitely the jacuzzi. It was just outside from the pool. Yes, outside in -20C temps. It is about a 15M walk from the door to the water. The jacuzzi can comfortably hold 10 people, as long as not too many are kids.

Skiing: We rented equipment there. For Skis, Poles, Boots, Helmet, and Goggles, the total was something like 500RMB for the day. So, if you have your own equipment, and can manage to haul it to Yabuli, you can definitely save some Yuan. FYI, Helmets are required to get on the lifts. The process to rent and return was actually quite smooth. Not all the staff speak English, but there were plenty of people willing to help out the foreigners. We went down to the ski hall around 1830 on the day before we want to ski to get set-up. We were given a locker and all the gear so that all we had to do on the following morning was come down, get kitted up, and walk out to the Gondola lift, which is about a 75M walk once you walk outside (super convenient). We skied for 2 days. My advice is to get out in the morning, before the classes start at 0930. The lifts open at 0800, so plenty of time to beat the rush. Since the trails are on the Eastern side of the mountain, the light on the trails is much better in the morning. After about 2PM, the Sun is already behind the mountain, so while it is not dark, the visibility on the trails is not as good. The Gondola has a midway point where you can get off if you just want to do the easiest run, or you can it to the top for some spectacular views. There is a coffee shop at the top and the start of the runs back down. Since it is a Gondola, you can also just ride up to the top without skis. Each person has a lift pass that is good starting on the day after check-in through your day of departure. I won't comment much on the quality of the skiing since that is highly subjective to past experiences and expectations. Suffice it to say that I agree with most others that it is probably among the best...in China.

The minor gripes (as feedback for the staff):
- Charging by the hour for using the pool tables? Really? I get the need to ensure the equipment is well maintained, and that there are only so many available, but there has to be a better approach.
- An adults only lounge (non-smoking), with easy access to the bar, would be a nice addition. Just a few too many little ones running around playing tag among the adults.

This review is the subjective opinion of a TripAdvisor member and not of TripAdvisor LLC
Kelvin G
Beijing, China
11965
Reviewed 2 January 2021 via mobile
Excellent service perhaps needs a couple of extra activities.

Amazing service from the team especially Aaron, Edo, Martin, Apple. Was delighted with their attentiveness and how they seemed genuinely concerned for our well being. My daughter has a small stomach ache and they kept tabs on her throughout.

Food was generally excellent with New Year's Eve being an absolute highlight with fresh oysters, crab, prawns, mussels, ham etc being top of the list!!!

Only minor issue with food was some dishes were consistently cold like the congee.

The hotpot restaurant I read previous had got a bad review but when we went it was fine and I'd recommend going especially for the experience. Lots of meat, seafood and veges provided.

Skiing was great and the free lessons made it excellent.

Perhaps a suggestion would be to have other non skiing activities. I had a day off and tried the hike but the guide that turned up didn't seem prepared for a long walk (jeans and jacket) so we ditched him and explored alone. Also tried the outdoor jacuzzi but it was too hot (we saw 3 other groups that also could not get in the water and they had to call maintenance). Must say Edo did a great job at the climbing wall but that's a brief stop and they did have a bouncy castle but was only on day one.

Even a guided sleigh tour for families or something outside of skiing.

Some areas did need a coat of paint so a few touch ups would be nice but overall the team did a great job especially since many of their expat team couldn't be in China because of Covid.

I would go back.

My family stayed in Clubmed Yabuli for 5 days. This is our 2nd time visit. We really enjoy the excellent service and ski experiences provided by the hotel. The hotel is full board which includes all meals and afternoon tea which is very rare in China. Also my son likes the ski coach (they call them G.O.)such as Kevin, ED and Carl. They have great passion in taking care of the kids and coaching them how to ski. We will definitely come back again every year.

Trip type: Travelled with family
Review collected in partnership with 单个酒店
This business uses tools provided by Tripadvisor (or one of its official Review Collection Partners) to encourage and collect guest reviews, including this one.
Ask zhuye_sh1984 about Club Med Yabuli - China
Thank zhuye_sh1984

This review is the subjective opinion of a TripAdvisor member and not of TripAdvisor LLC
JackieC460
London, England, United Kingdom
41
Reviewed 23 December 2020 via mobile
Amazing G.O. team and ski coaches!

We had an amazing stay in clubmed yabuli for more than 10 days. All the G.O. took very good care of us, especially my son. He enjoyed the ski lessons and the activities so much, that he didn't want to go home....now he is asking me everyday, when are we going to the clubmed again...
Special thanks go to Coach Tony, who taught so well that my son is able to do good parallel turn and is comfortable in black trail now. Coach Ann, Etienne and a lot other coaches are all very good.