US$171
View deal
Hotels.comUS$171
Booking.comUS$173
CheapTicketsUS$171
TravelocityUS$171
Orbitz.comUS$171
eDreamsUS$173
View all 17 deals
Prices are provided by our partners, and reflect total costs of the stay, including all taxes and fees known to our partners. Please see our partners for more details.
Payments made by partners impact the order of prices displayed. Room types may vary.
theresabb2014
Auckland, New Zealand
215

Very quiet relaxing atmosphere.
Comfortable beds. Very clean.
Good walk to village. Staff helpful.
Grest value. Restaurant onsite but preferred to use village restaurants. How ever very I do believe does have good food and service. Mini golf next store.

Trip type: Travelled with friends
See all 133 reviews
Payments made by partners impact the order of prices displayed. Room types may vary.
Nearby Hotels 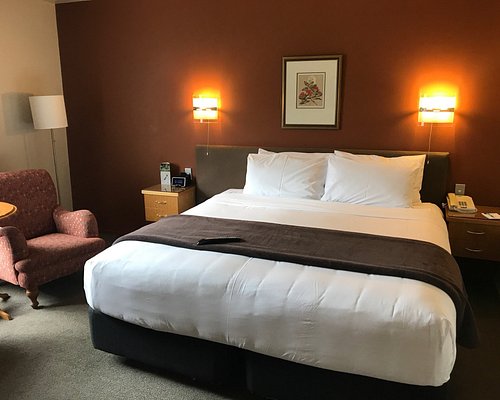 Great value today
Hanmer Springs Hotel
US$113
Booking.com
View deal
Free cancellation
Expedia.com
US$103
Priceline
US$114
Hotels.com
US$103
View all 15 deals from US$103
1,098 reviews
1.0 km from Hanmer Springs Retreat
We compared the lowest prices from 15 websites

Expedia.com
View deal
Free cancellation
Pay up to 12X
Tripadvisor
US$127
eDreams
Booking.com
US$129
View all 12 deals from US$127
195 reviews
0.3 km from Hanmer Springs Retreat

Priceline
View deal
Free cancellation
Booking.com
US$158
eDreams
US$158
Tripadvisor
US$158
View all 13 deals from US$158
253 reviews
0.5 km from Hanmer Springs Retreat

Expedia.com
View deal
Free cancellation
Pay up to 12X
Priceline
US$113
Hotels.com
US$112
Booking.com
US$113
View all 16 deals from US$111
134 reviews
1.3 km from Hanmer Springs Retreat
We compared the lowest prices from 16 websites
Breakfast included
8 on Oregon Boutique Lodge

eDreams
View deal
Booking.com
US$156
Priceline
US$153
StayForLong
View all 6 deals from US$153
84 reviews
1.6 km from Hanmer Springs Retreat
We compared the lowest prices from 6 websites
Alpine Lodge Motel
US$92

I don't believe this hotel is worth the price. Rooms weren't very clean, the cutlery / glasses were mismatched and the bathroom door didn't shut as the lock had issues. On-site restaurant served a pint of cider and a pint of beer that weren't cold which put us off eating at the restaurant.

This review is the subjective opinion of a Tripadvisor member and not of TripAdvisor LLC.
LynetteB214
2
Reviewed 11 April 2021
Disappointing

We booked a two bedroom apartment over Easter 2021.
When we arrived the apartment allocated to us had two bedrooms however the second bedroom had NO windows and just 2 single beds. No bedside tables or wardrobe as it was very small.. The other rooms were ok.
The manager was lovely when I went downstairs and told them that it is not possible for me to sleep in a bedroom with no window so he showed us 2 other apartments.
The second 2 bedroom apartment was just ok.
Curtains falling down, dead blow flies on the window sills and generally in very poor condition someone had carved a message on the window sill as well.. The living space was very small, The towels were old and grey. This hotel has 8/10 rating and we thought we would get something better. The level of cleanliness was poor, cigarette butts in a sand box outside the bedroom window ...all very average. When the next door apartment put on their bathroom extractor fan I could hear it loudly in my room, We had to knock on their door to turn it off as it kept me awake at night. No sound proofing between rooms at all we could hear everything in the next door apartment! On a positive note the beds were comfortable and also the staff were very nice, I could not fault them.

Room tip: Ask to change rooms if you do not like your room.
Ask LynetteB214 about Hanmer Springs Retreat
Thank LynetteB214

This review is the subjective opinion of a Tripadvisor member and not of TripAdvisor LLC.
Odyssey704206
408
Reviewed 27 February 2021
peaceful

This review is the subjective opinion of a Tripadvisor member and not of TripAdvisor LLC.
Picnicqueen3
2
Reviewed 13 February 2021
A pleasant night

We arrived in the evening without a booking and were booked in quickly and easily at a reasonable rate. We were told where our room was, upstairs, and found it easily. Parking was a bit tight to get close as possible to the room to carry things up the stairs but ok. The king size bed was very comfortable and crisp white linen really nice. The spa bath was lovely and good water pressure for shower,I would have liked more places to put wash bags. Overall very comfortable for overnight. I was glad we kept the bathroom door shut and windows open to let the steam out as the $700 fire call out fee posted on the bathroom door if the alarms went off worried me!! Kitchen facilities are very simple probably because they have a restaurant. Service was friendly.

This review is the subjective opinion of a Tripadvisor member and not of TripAdvisor LLC.
rachelpnz
Waikanae, New Zealand
234
Reviewed 22 January 2021 via mobile
Comedy of errors

We chose this motel and the “executive spa room” for the good review score, spa bath, coffeemaker, location and views advertised. The room had no coffee (except instant), a nice view, and a spa bath without a plug. Every time we asked for a problem to be fixed we got a string of excuses and were initially told they couldn’t fix it. When pushed hard (and after being told “no” along with excuses), we got vouchers for a replacement drink (good). Eventually, after being told “no”, provided with a range of excuses and having to push/argue for what we needed, we got a bath plug.

We don’t mind if things aren’t right at first but customers do not need defensive excuses and/or a refusal to address the error and/or to be forced to argue for what they’ve need/paid for. What we need is a genuine, simple apology followed by fixing the problem.

Also , we recommend you don’t prepay for breakfast as the menu prices are all cheaper than than the prepay price. The menu is good and available in advance.

This review is the subjective opinion of a Tripadvisor member and not of TripAdvisor LLC.
View more reviews
PreviousNext
1234…