US$173
View deal
Booking.comUS$173
Hotels.comUS$173
CheapTicketsUS$173
TravelocityUS$173
eDreamsUS$173
Orbitz.comUS$173
View all 17 deals
Prices are provided by our partners, and reflect total costs of the stay, including all taxes and fees known to our partners. Please see our partners for more details.
Payments made by partners impact the order of prices displayed. Room types may vary.
Odyssey704206
408

See all 133 reviews
Payments made by partners impact the order of prices displayed. Room types may vary.
Nearby Hotels Expedia.com
View deal
Free cancellation
Pay up to 12X
Booking.com
US$135
Hotels.com
US$143
Priceline
US$142
View all 14 deals from US$135
1,097 reviews
1.0 km from Hanmer Springs Retreat
We compared the lowest prices from 14 websites 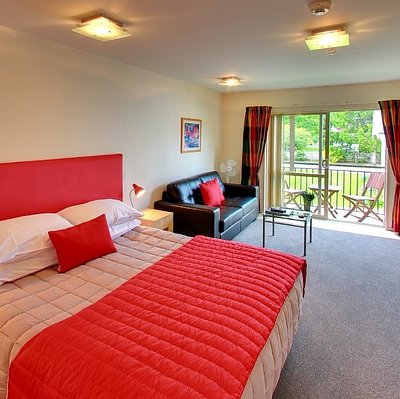 We arrived in the evening without a booking and were booked in quickly and easily at a reasonable rate. We were told where our room was, upstairs, and found it easily. Parking was a bit tight to get close as possible to the room to carry things up the stairs but ok. The king size bed was very comfortable and crisp white linen really nice. The spa bath was lovely and good water pressure for shower,I would have liked more places to put wash bags. Overall very comfortable for overnight. I was glad we kept the bathroom door shut and windows open to let the steam out as the $700 fire call out fee posted on the bathroom door if the alarms went off worried me!! Kitchen facilities are very simple probably because they have a restaurant. Service was friendly.

This review is the subjective opinion of a Tripadvisor member and not of TripAdvisor LLC.
rachelpnz
Waikanae, New Zealand
234
Reviewed 22 January 2021 via mobile
Comedy of errors

We chose this motel and the “executive spa room” for the good review score, spa bath, coffeemaker, location and views advertised. The room had no coffee (except instant), a nice view, and a spa bath without a plug. Every time we asked for a problem to be fixed we got a string of excuses and were initially told they couldn’t fix it. When pushed hard (and after being told “no” along with excuses), we got vouchers for a replacement drink (good). Eventually, after being told “no”, provided with a range of excuses and having to push/argue for what we needed, we got a bath plug.

We don’t mind if things aren’t right at first but customers do not need defensive excuses and/or a refusal to address the error and/or to be forced to argue for what they’ve need/paid for. What we need is a genuine, simple apology followed by fixing the problem.

Also , we recommend you don’t prepay for breakfast as the menu prices are all cheaper than than the prepay price. The menu is good and available in advance.

This review is the subjective opinion of a Tripadvisor member and not of TripAdvisor LLC.
bee33878
New Zealand
82
Reviewed 6 January 2021 via mobile
Terrible is an understatement

I was highly disappointed in my stay at Hanmer Springs Retreat.

Firstly, the WiFi wouldn’t work. Weather was blamed as the cause. That’s ok, we can survive without WiFi.

The motel has signs that state you need to keep the bathroom door closed when having a shower as they have sensitive fire alarms that can activate from steam. That’s odd but ok we can roll with that. I had a shower followed by my partner. We kept the fan on, door closed but closed the window as it opened onto the car park and the second storey looked down on it. I’m not showering with everyone being able to look in. Even though we followed their instructions, opened the window after the shower, the alarm went off.

Firstly the male manager told us we must not have closed the door and then asked if we had been smoking in the room!!! Unbelievable! Granted the male manager calmed down a bit and was slightly more communicative but he still wasn’t discussing the matter well.

Then the worse came. The maintenance manager came out and he was rude, obnoxious and imposing. When I tried to calmly discuss the matter as I was worried, he told me to “calm down”. I was just trying to discuss the situation! Calmness.. Something he needs to learn to do.
I pointed out that maybe as a maintenance manager, he may need to look into the ventilation of the bathrooms as alarms going off due to steam is not ideal. His response with a smirk and a roll of his eyes was “I’ll note that down shall I?”

He then told me he didn’t believe me that we kept the bathroom door closed and must have had it open. Sorry but I don’t shower with a door open, especially with my 11 year old son in the room.
His treatment of us was disgusting. It left me in tears and ruined our trip. I’ve never been so offended.

He then told us that he could charge us $700. My partner said that we wouldn’t be paying that under any circumstance and he said “oh yes you will be”. Sorry it’s not our fault you have faulty systems. Why should customers pay for that when we did everything asked of us? The mangers said we wouldn’t have to pay as the fire service had not come out which is good but in all honesty no customers should have to pay for these errors.

Matt the maintenance man’s aggressive behaviour is unacceptable and I can’t believe someone like that is allowed anywhere a business where he might encounter paying customers.

So in review Hamner Spring Retreat, do not threaten your customers with $700 for your malfunctioning motel. Fix your issues so people are not left upset and offended. Customer service should be your top priority and with people like Matt your maintenance man, your lacking hugely.

There are also heaters coming off the wall, holes in the wall and a huge square cut out with exposed pipes. I guess he isn’t doing so well in his job and might need a review of his services.

The only saving grace was the kind female manager. She needs to be front of house and leave her husband and awful maintenance manager out back where they might learn manners and how to deal with customers. At least she knows how to appropriately communicate with customers.

We would have left this motel after this incident but unfortunately there was no more accommodation in Hanmer Springs. I had a terrible night and couldn’t wait to leave in the morning.

I’ve attached photos of the window to show why that needs to be closed when showering and also of the damage that was already in the room.

I have also contacted VR Hotels as I see the Hanmer Springs Retreat falls under this umbrella. I felt they needed to know of this unfortunate situation.

This review is the subjective opinion of a Tripadvisor member and not of TripAdvisor LLC.
JennaA416
2
Reviewed 5 January 2021 via mobile
Very disappointed

Don’t recommend staying here. Has been the worst motel we have stayed in on our South Island road trip. We booked 2 rooms and were put in the complete opposite ends of the motel. One room was extremely smelly. The superior studio was good. We found our rooms hard to find and no one offered to show us to our rooms. Terrible parking. Wouldn’t stay here again.

This review is the subjective opinion of a Tripadvisor member and not of TripAdvisor LLC.
charlotteportegys
Christchurch, New Zealand
11
Reviewed 2 January 2021
Romantic getaway gone slightly wrong

My partner and I decided to stay at Hanmer Springs Retreat for a romantic getaway.
The room was a great size including the bed. When our TV was not working the staff were great and fixed it. But when I got into bed a noticed cobwebs and a spider or two on the ceiling above the heat pump and so that very unsettling and disgusting. Furthermore the bathrooms wallpaper is falling apart and the paint is starting to wear.
For the price we paid it is not up to a 4 star standard more like a 3.

This review is the subjective opinion of a Tripadvisor member and not of TripAdvisor LLC.
View more reviews
PreviousNext
1234…