The hotel is comfortable and we'll run and the staff speak English. Breakfast was included in the room price and the restaurant is open all day for lunch, dinner, coffee and snacks. Guests can also enjoygym, a sauna and a swimming pool at no extra cost. Good value and convenient, central location.

Trip type: Travelled solo
See all 130 reviews
Payments made by partners impact the order of prices displayed. Room types may vary.
Nearby Hotels

eDreams
View deal
Priceline
US$38
Booking.com
StayForLong
View all 6 deals from US$38
111 reviews
1.8 km from Aqua Hotel Burgas
We compared the lowest prices from 6 websites 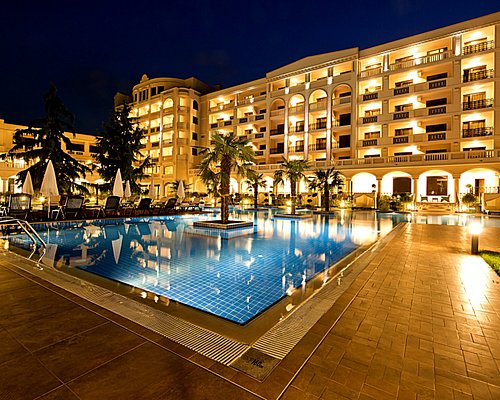 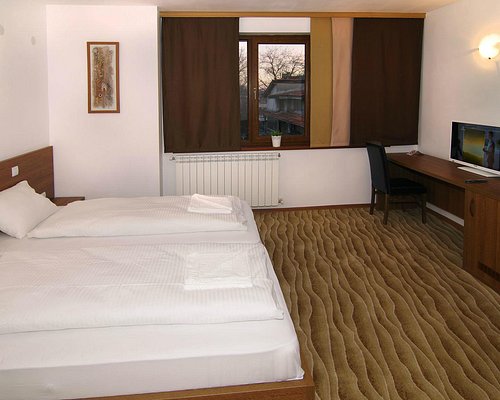 Hotel Doro
US$49
Booking.com
View deal
Free cancellation
Reserve now, pay at stay
eDreams
US$49
Priceline
US$49
Agoda.com
US$49
View all 6 deals from US$49
38 reviews
1.7 km from Aqua Hotel Burgas

Travelocity
View deal
Orbitz.com
eDreams
US$47
Hotels.com
US$56
View all 15 deals from US$47
106 reviews
2.2 km from Aqua Hotel Burgas
We compared the lowest prices from 15 websites
Hotel Chiplakoff
US$44

11AM and the hotel stuff is cleaning and setting up the conference halls of the hotel. It is quiet outside the window, but you hear every single movement of table or chair the stuff is doing... sorry hi price- low quality..

This review is the subjective opinion of a TripAdvisor member and not of TripAdvisor LLC
mihail_ioan
Bucharest, Romania
10838
Reviewed 2 October 2018 via mobile
Very good 3-star hotel

We've had a very spacious, large bed, room, facing towards the sea. The furniture is good and the decorations tasteful.

The view isn't amazing, there are some buildings between the hotel and the sea.

Breakfast was good and varied. Staff is alright.

This review is the subjective opinion of a TripAdvisor member and not of TripAdvisor LLC
Andrew V
Rome, Italy
150103
Reviewed 17 August 2018
The receptionist from hell but overall not a bad hotel

The receptionist and the staff in general play a very important role in the grading of an hotel. Unfortunately the first impact with Hotel Aqua was with what a would describe ‘the receptionist from hell’. In many years of travel all over the world I have never seen such a bad attitude towards a customer. To avoid being to boring suffice to say that we called management to complain and they were apologetic and kind and immediately addressed the issue at hand to our complete satisfaction. It appears that management is trying to bring the staff to an acceptable standard of customer care but hey are struggling in their efforts. The hotel itself is not bad, rooms a spacious,clean and the cost offer good value for money. Breakfast could be perhaps improved but is enough to get you started. Good swimming pool, gym and spa. I really wish good luck to the management in their effort to improve standards at this hotel. The other exchange with had with he front desk the following days were OK which is a good saying. Last point, there are no TV channels in English or at least I did not find it.

This review is the subjective opinion of a TripAdvisor member and not of TripAdvisor LLC
Kalimantsi
Dublin, Ireland
262133
Reviewed 6 August 2018
Good price Hotel

Needed an Hotel close to airport for early flight and this fitted the bill. Receptionist needs a course in customer service, She was sour faced and short with us and took a very long time to book us in although we had reservations.We had three rooms two double and one single ,we asked for all rooms to be close as two of our party are invalided. but she gave us rooms on different floors and we had to argue for same floor.There was no shower soap Etc. in the rooms.
Rooms are just ok ,nothing fancy,Towels a bit old and worn in bathroom.
Breakfast was cheap 7leva ,but just about enough to get you started for the day.
Overall just right if you get it at the right price and just 20 mins from airport

This review is the subjective opinion of a TripAdvisor member and not of TripAdvisor LLC
JoBlackbg
La Linea de la Concepcion, Spain
1
Reviewed 28 July 2018 via mobile
The worst hotel experience ever!

I booked an apartment for 2 and a triple deluxe room for 1 night stay on the 26th-27th of July 2018 for our family of 5. Upon arrival, we discovered that the hotel was falsely advertised as a 4 star hotel, when in fact it was a 3 star hotel. The terrace door of the apartment was locked and the terrace was not accesible. Upon the first use of the toilet facility in the triple room (in the afternoon), we realized that the toilet was blocked. The receptionist who called herself Svetlana (no name tag, so we took her word for it) told us in the rudest way possible that she can not help us and we have to wait until the next day before we can use the toilet again. When my partner went to reception to speak to her (he spoke english), she only replied to him in bulgarian and when asked to speak in english she said very rudely that she will not and also refused to let us speak with the hotel management. In the end the hotel cleaner was sent to unblock the toilet. Once the toilet was unblocked, we were told that due to the pipe system in the hotel, the used toilet paper can not be flushed in the toilet, but must be collected in the bathroom bin! We are regular travelers and we've never witnessed such a big lack of professionalism, empathy and basic human decency. Will never return to this place again.