Nice hotel with lots to do - Hilton Waikoloa Village

Hilton Waikoloa Village
37 people are viewing this hotel
Lock in the lowest price from these sites
US$1,028
Free cancellation until 27/06/21
Reserve now, pay at stay
View deal
Hotels.comUS$1,028
PricelineUS$1,021
Hilton.comUS$1,028
CheapTicketsUS$1,028
TravelocityUS$1,028
Orbitz.comUS$1,028
View all 12 deals
Prices are provided by our partners, and reflect total costs of the stay, including all taxes and fees known to our partners. Please see our partners for more details.
Payments made by partners impact the order of prices displayed. Room types may vary.
bajandelightful
Boston, Massachusetts
3019

Nice hotel with lots to do

First off its a great hotel with friendly staff. We syated one night in the Palace tower. The room was clean but smelled a little funky I think the carpets smelled like stinky feet but nothing a little lysol couldn't fix. I stayed in a standard oceanfront room that had a small partial view of the ocean but more of the beautiful garden.
The bathroom was very small but the room and dressing areas were big.

The property is beautiful great for a sunrise or sunset workout. Most guest were not following masked protocols in certain property areas nor was it enforced by staff.

Overall it was a nice stay. I'm sure it would be much better post covid.

The lagoon was nice but you need to bring your own snorkel gear since its not being rented due to covid.More

Show less
Trip type: Travelled with family
See all 10,288 reviews
Payments made by partners impact the order of prices displayed. Room types may vary.
Nearby Hotels 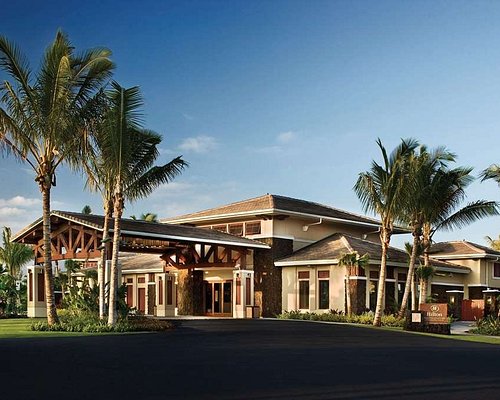 Kohala Suites by Hilton Grand Vacations
US$579
Booking.com
View deal
Reserve now, pay at stay
Hotels.com
US$579
Expedia.com
US$579
CheapTickets
US$579
View all 15 deals from US$579
1,528 reviews
1.0 km from Hilton Waikoloa Village

Taking safety measures
We compared the lowest prices from 6 websites
Ocean Tower by Hilton Grand Vacations
US$470
Booking.com
View deal
Reserve now, pay at stay
Hilton.com
US$470
ZenHotels.com
US$431
Hotels.com
US$470
View all 17 deals from US$431
290 reviews
0.2 km from Hilton Waikoloa Village

We loved this resort. It was large, tons of pools, very clean and beautiful. Lots of dining options and a tram to get around. The waterslide was fun. Loved the lagoon. Great experience for our family with a 4-year old.

Review collected in partnership with Hilton Hotels & Resorts
This business uses tools provided by Tripadvisor (or one of its official Review Collection Partners) to encourage and collect guest reviews, including this one.
Ask adavila2786 about Hilton Waikoloa Village
Thank adavila2786

In spite of pandemic they made us feel safe and secure as well as welcome. The pizza with the thick crust in the Nui was to die for. They also had generous portions of our food to take out. Our Korean burger in the Lagoon was unusually tasty and cooked perfectly. We had a great time watching the dolphins and seeing turtles in their lagoon. The grounds are beautiful and loved the waterfalls.

Review collected in partnership with Hilton Hotels & Resorts
This business uses tools provided by Tripadvisor (or one of its official Review Collection Partners) to encourage and collect guest reviews, including this one.
Ask Robert T about Hilton Waikoloa Village
Thank Robert T

This is my first time visiting this Hotel, and honestly my last. This hotel is massive, and has a beautiful view but not what I expected. I called back in March 2021 and asked if they offered an all inclusive beverage and food package for my family of 5, while I was told they did over the phone only to find out as I get there that they DO NOT offer such thing. First night, HORRIBLE experience as we traveled over 13 hours to get there and every restaurant inside was no use to us. The restaurants had either closed or had some sort of issue in the kitchen and we had to starve that night (FYI I traveled with three children the youngest 5). No variety of drinks, or food so be prepared to eat the same thing everyday unless you rent a car and get to experience the variety of good inexpensive places that the nearby locations have to offer. Also, the Marketplace (about 20min walk) has variety of grab and go food and a small restaurant inside that you can enjoy more. Also if you have small children DO NOT let them swim in the kiddie pool/lagoon connected to the big pool by the Makai tower, it smells like urine! I went into the lagoon and never again, I came out of the water itching all over stick with the pool if you have sensitive skin. Let me not forget the package I purchased had complimentary late check-out if available and let me say they DO NOT value you that. Do your research, there's other great places, rent a car, and there are excursions that you can do yourself and save a few bucks. Lastly, security here is barely seen which is worrisome to me.

Room tip: Rooms on Makai Tower have the most view, active environment, and birds chirping which is beautiful to me.
Ask ileanisb about Hilton Waikoloa Village
Thank ileanisb

We’ve been to Hawaii a few times and decided to take the whole family to the big island.
Not one glitch! Everyone was overly helpful which made us more calm coming in. Carole who takes care of the events went above and beyond helping to make us 6 adults a baby happy. She gets a gold star from all of us ⭐️