Ramada by Wyndham Sioux Falls Airport-Waterpark & Event Ctr
Lowest prices for your stay
Lock in the lowest price from these sites
US$77
Free cancellation until 01/05/21
Reserve now, pay at stay
View deal
Expedia.comUS$77
PricelineUS$77
WyndhamUS$77
Hotels.comUS$77
Agoda.comUS$77
HurbUS$80
View all 18 deals
Prices are provided by our partners, and reflect total costs of the stay, including all taxes and fees known to our partners. Please see our partners for more details.
Payments made by partners impact the order of prices displayed. Room types may vary.
Tara2217
1

It was a perfect weekend getaway we were even able to add an extra night after we decided to stay. I can not wait to be able to get to Sioux Falls again and stay at the Ramada. My kids love the pool area and the arcade area on the second floor.

Review collected in partnership with this hotel
This business uses tools provided by Tripadvisor (or one of its official Review Collection Partners) to encourage and collect guest reviews, including this one.
See all 1,325 reviews
Payments made by partners impact the order of prices displayed. Room types may vary.
Nearby Hotels 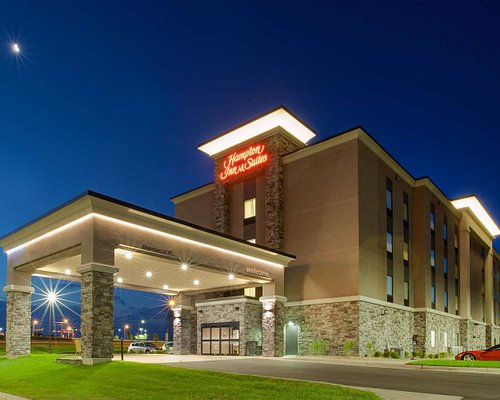 It’s truly sad how much money it costs to get so little in return. Our first room smelled so bad of marijuana and smoke I almost vomited. Both rooms were ice cold (literally) and filthy. I had to shove multiple towels and blankets under and around the air conditioner because the draft was so bad we couldn’t keep the room warm. We had to do a similar thing in the bathroom, where the vent fan did not work. So, the cold, winter air was blowing in the bathroom so bad we had to block it with a towel and keep the door closed. Only to be met with a freezing cold bathroom experience that would wake up a polar bear.
Outside of a pool that was so swamped you could barely walk without running into someone. This place has very little to offer.
Because of the poorly planned and managed check-in, there was approximately 20-25 other people in line waiting to check-in to the hotel because they WILL NOT allow you to check-in one second before check-in time, regardless if your room is ready or not.
On top of that, there was one person (rudely) checking people in. The other one was standing off to the side, literally doing nothing, when they were standing there. Then, they would just up and walk away, while dozens of people stood, waiting to be checked in.
Once getting into our second room, it looked like the placed hadn’t been cleaned in months. Upon asking for another room that didn’t smell like smoke or wasn’t filthy, we were told there was no other rooms available and this was our only remaining option. So, not wanting to ruin our long, weekend getaway, we decided to stay. What a poor decision that was.
Again, dealt with rude staff and delays or excuses each and every time we turned around. From in correct drinks at the bar, to having to argue with the bartender that she was giving my credit card to someone else (literally handed my CC to her, watched her scan it and hand it to someone else). Then she wanted to argue that it was not my card, only for the other customer to step in and say, “ma’am, this isn’t my credit card.” To having multiple orders mixed up, not made or “forgotten” about at the restaurant. Just a disappointing disaster.
I won’t plan on coming back anytime soon.

Save yourself some money and find another hotel. While the Waterpark is nice, the service is horrible. We booked our room Jan 30 and arrived Feb 26. They overbooked the suites so we didn't get the room we paid for. We were offered a king bed room for our family of 5. The pullout couch did not work and no other rooms so our three kids had to sleep on floor. Very limited staff in restaurant during breakfast, rude night front desk help, and the list goes on.

This review is the subjective opinion of a TripAdvisor member and not of TripAdvisor LLC
Janet S
Jackson, MN
71
Reviewed 25 February 2021
Great family fun

The hotel has so much to offer for families with kids of all ages, from the fantastic pool options to the Tiki Bar to the pizza on site to the game room. The older kids loved the big tube slide and the basketball swim area and the little ones loved the pirate ship and shallow water.

Review collected in partnership with this hotel
This business uses tools provided by Tripadvisor (or one of its official Review Collection Partners) to encourage and collect guest reviews, including this one.
Ask Janet S about Ramada by Wyndham Sioux Falls Airport-Waterpark & Event Ctr
Thank Janet S

This review is the subjective opinion of a TripAdvisor member and not of TripAdvisor LLC
ProudMomSince2005
Olivia, Minnesota
1
Reviewed 21 February 2021
Horrible for a “family friendly”hotel

The title of this hotel should be if you want to party hard with friends and smoke while having a good time in the pool, come to this hotel. Only on Monday thru Thursday during a school year in the daytime can you get that family friendly appeal. But after school watch out the locals come in, they let others in. Wristbands well who needs those now because we are people who have connections and just turn the other direction and the families who spend their hard earned income to try and do something nice for their children get the short end of the stick. The hotel guests with other hotel guests are wonderful. But man, nights were aweful to the part I got too scared to allow my kids to do the one thing they wanted to do in SD.

Review collected in partnership with this hotel
This business uses tools provided by Tripadvisor (or one of its official Review Collection Partners) to encourage and collect guest reviews, including this one.
Ask ProudMomSince2005 about Ramada by Wyndham Sioux Falls Airport-Waterpark & Event Ctr
Thank ProudMomSince2005

This review is the subjective opinion of a TripAdvisor member and not of TripAdvisor LLC
WinnerSD
Winner, South Dakota
21
Reviewed 18 February 2021
Not her again.

I like this hotel but the front desk lady is a piece of work. I have heard her going at it with other guests on previous stays. I can’t believe she is still here. She is terrible for business.

Booked a poolside suite, our room was behind the bar, down the hall- not poolside. This was a Wednesday night. I went to ask her if we could have a different room and she said there were none available. An obvious lie-there were about 10 people in the whole hotel.

I asked her where I should park and what entrance to use and she told me the entrance on the exact opposite side of the hotel. I pointed that out and she said “oh you didn’t tell me you wanted a map. Well just take it then.” Yikes!

Other than that, nice food, warm hot tub, good location away from hustle and bustle and close to airport.