Albert Cottage - Hotel - Restaurant - Bar
Lowest prices for your stay
Lock in the lowest price from these sites
US$251
View deal
TripadvisorUS$251
Hotels.com
Expedia.comUS$251
eDreamsUS$251
Orbitz.comUS$251
CheapTicketsUS$251
View all 11 deals
Prices are provided by our partners, and reflect total costs of the stay, including all taxes and fees known to our partners. Please see our partners for more details.
Payments made by partners impact the order of prices displayed. Room types may vary.
85kevinb
Paris, France
53

We were recommended the food and facilities at the Albert Cottage and duly booked an evening meal on the final day of our holiday. Unfortunately from arrival to departure our experience was not the greatest. I put all my concerns directly to the Hotel and the following day received an email from Annie Horne the property owner, expressing her apologies for all the problems we experienced and explained the circumstances around the reason for some of my points, however, at no time used them as excuse for the lack of customer experience. I fully appreciate many businesses are facing difficulties during this very unusual situation, particularly with staffing. A very generous refund was offered plus a complimentary return which we will certainly take up when returning to the IOW. I have no doubt that lessons will be learned and the Hotel will back to the first class service they always aim to achieve.More

Show less
See all 355 reviews
Payments made by partners impact the order of prices displayed. Room types may vary.
Nearby Hotels 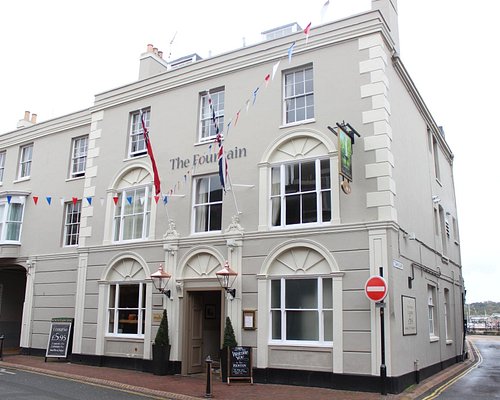 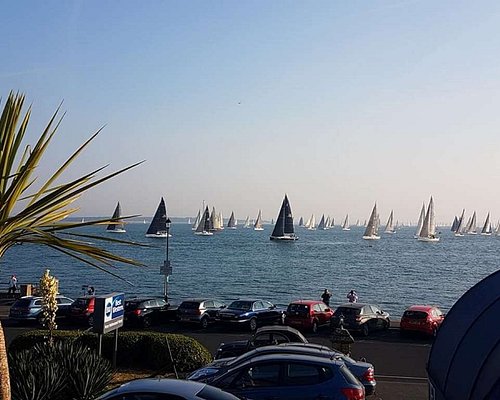 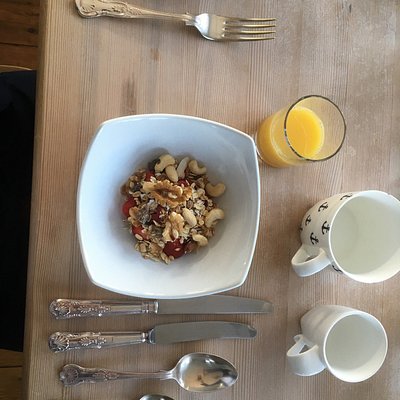 Don't really know where to start with this , we were given our key and directed to our room .

Upon entering everything looks very grand , but it doesn't take lond to see that the hotel is beginning to show the signs of ageing.

The windows were so draughty that I thought they were open , on one of the Windiest days on the island not a good start .
The decoration in the room had seen better days as well , scuff marks on walls and furniture that needs some TLC .

The tea tray had , tea , coffee , but only 3 sachets of sugar , a bottle of water was supplied.

The bed was not the most comfortable but I slept quite well .

We went down for dinner we both had the Fish cakes which were nice although slightly under seasoned , and did not taste much of fish .

For the mains I plumped for the Burger which was huge , the only way to eat this is to deconstruct it , on top of the Burger was a belly of pork , the chips were crispy with a fluffy centre , this was very good indeed .

My wife had the lamb which she said was very nice , she said it was all cooked very well .

Dessert was a mixed bag , my wife had the brownie with ice cream , as you can see from the pictures that looked very nice , but the cheese board left a lot to be desired , 4 tiny bits of cheese , no butter , no grapes , no celery , in fact not a bit of green in site .

This stay , Dinner , bed and breakfast , was on a Groupon deal and overall was good value for money .

Maybe now thing's are getting back to normal the hotel can get the decorators in.

This review is the subjective opinion of a TripAdvisor member and not of TripAdvisor LLC
Mr Harry B
Hampshire, United Kingdom
281153
Reviewed 24 May 2021
Albert Cottage Hotel Restaurant - Sunday lunch.

It was great to get out and about today for Sunday lunch. Took the opportunity of visiting the Albert Cottage in East Cowes. We were not disappointed, service by the team was superb, all very polite, smartly dressed staff, definitely service with a smile from behind a mask! Great choice catering for all tastes off their lunch menu. Today we ate in the bar, it was lovely to look out on the hotel garden. Have no hesitation in recommending the Albert Cottage, looking forward to a return visit. Well done team a great start to a new season.
Harry's tip - book early to avoid disappointment.

This review is the subjective opinion of a TripAdvisor member and not of TripAdvisor LLC
worzelle
Frome, United Kingdom
146155
Reviewed 5 February 2021
Thanks for Providing us with a Wake.

I have only just got around to writing this review.

Our dear mum died in early September and we thought we wouldn't be allowed a Wake after her funeral because of Covid Restrictions.
Albert Cottage, where we have had other lovely gatherings over the years provided a safe and Covid secure envirioment for us all. They were also able to cater for me and my Gluten Free diet.
It was a really lovely intimate setting in the Socially Distanced Bar and everything worked out well on this very sad occaision.
There was a lovely ourside area too, but as it was so wet and windy all afernoon we had to stay inside.

Thanks to everyone of the Albert Cottage staff for all your help and proffesionalism.

Thank you for such a lovely review. We are pleased everything was perfect for you on such a sad occasion

Report response as inappropriateThank you. We appreciate your input.
This response is the subjective opinion of the management representative and not of TripAdvisor LLC
Hightrees1
Isle of Wight, United Kingdom
22
Reviewed 23 November 2020 via mobile
Excellent Sunday Lunch

Due to the C19 restrictions, we took advantage of the takeaway Sunday lunches prepared by Albert Cottage. The family really enjoyed the meal, expertly prepared and presented. Thank you Annie and the team

Thank you for your lovely review, always a pleasure to welcome you, even if only at the door for a takeaway! So pleased you enjoyed it.

We're working hard behind the scene to get ready to open our doors. We open on 16 April for Friday, Saturday and Sunday's only outside dining and drinking and then fully on 17 May.

Look forward to welcoming you back.

Report response as inappropriateThank you. We appreciate your input.
This response is the subjective opinion of the management representative and not of TripAdvisor LLC
tobyyarwood
Iwerne Minster, Dorset, United Kingdom
32
Reviewed 31 October 2020 via mobile
Excellent short stay

Lovely place with very professional staff and a civilised atmosphere. Almost like staying at Osborne House itself. The breakfast is large and varied and definitely worth having. Delicious! The room (Albert, no. 4) was large and warm and very comfortable, with a large bed and a balcony. There was a huge bathroom and a spare single room which we had not expected and which made our room feel like a suite! There’s a main road 50m from the front of the hotel but I’m sure they would let you choose a room at the back if the slight traffic noise bothered you. It was not a problem for us. The young man in reception has the politest manner which could calm any troubles you may have.

Thank you for such a lovely review, we are so pleased you enjoyed your stay.

We look forward to welcoming you back real soon. We are working hard behind the scenes, refurbishing some areas and a bit of TLC all round to open for outside dining and drinking on 16 April for just Friday, Saturday and Sunday's until we open our doors fully on 17 May 2021.