Disappointing but not many options in... - Hilton Garden Inn Baltimore / White Marsh

US$100
View deal
Expedia.comUS$118
Priceline
Hotels.comUS$118
View all 20 deals
Prices are provided by our partners, and reflect total costs of the stay, including all taxes and fees known to our partners. Please see our partners for more details.
Payments made by partners impact the order of prices displayed. Room types may vary.
Allison S
Washington DC, District of Columbia
10999

Disappointing but not many options in this area

Show less
See all 832 reviews
Payments made by partners impact the order of prices displayed. Room types may vary.
Nearby Hotels 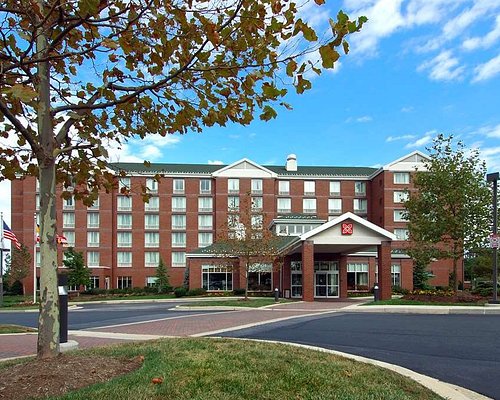 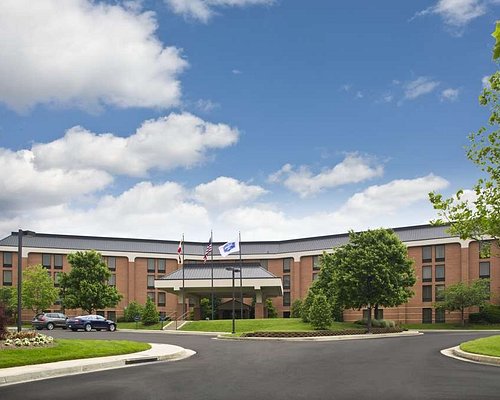 We stayed in this hotel in Baltimore to attend a wedding reception, and made use of the visit to drive to DC to visit the Capital in mid July. The whole Eastern Seaboard got hit by a heat wave, therefore, I can honestly report that the A/C in the hotel is excellent. However, the water in the small swimming pool was freezing cold, i suspect that the staff must have turned off the water heater in view of the heat outdoor.

the hotel is very clean even it is merely the Garden Inn. the decor in hotel lobby has a bit of the southern charm as in most of the Disney hotel lobbies in Orlando. I like the idea of having a coffee/tea stand in the lobby where one can freely serve ice cold water with lemon slices which is refreshing in the hot weather; coffee and tea. Cookies are also available from 5pm on. It is a nice touch.

We had a great promotional deal form Hotels which offered us $90/night with breakfast included. Unfortunately, the Hotel.com staff was too helpful who indicated that i was overcharged for 5 nights as the system had doubled charged in taxes when i registered online and discovered that i was charged more than 20% taxes, as a result, the Hotels staff indicated that she could adjust the database to indicate there was only one adult staying in the room to offset the double charged tax (i could not understand why she did what she did). Well, this had led to some undesirable consequences which i will describe in the following, so if anyone stumbles into the special that i have had, please beware.

As i checked in to the hotel late at night after the 400 mile journey, i was greeted by the receptionist, who indicated to me that the special offered to me must have been a mistake as the buffet breakfast could not have been included in my price. I responded calmly that i had the print out of the Hotels.com that stated that the breakfast was included despite the room charge was $90 (the regular was $160). The receptionist said that the discount code in the Hotels print out was foreign to her, as a result, she recommended me to call Hotels which should then contact Hilton and it would be likely that Hotels would have to pay for our breakfast so they could honour the deal offered to me. All was cool, i contacted the Hotels help line and i was informed by Hotels that the matter was straightened out after 10 minutes of my waiting on the phone. I was instructed to go up to the reception desk to receive my breakfast vouchers. On the following morning, i went up to the front desk to inquire about the vouchers and ensure that there would be no further issue regarding our stay in the hotel. The hotel manager greeted me and indicated that i had a terrific deal with Hilton and that the special code in Hotels print out was indeed a new promotional campaign code, and that the breakfast would and should be included. However, the registration indicated that there was only one person staying in the room, therefore, Hilton would honour the deal by offering us one free breakfast meal despite Hilton realized that we were a party of three. I did not want to make this into a real issue. I expressed my appreciation of prompt service and i left it at that. The truth was that someone in the administration must have made a mistake and the Hilton Garden Inn had to honour the offer, but they would use any means to ensure that they would not have a losing proposition. In view of our stay is definitely very inexpensive, i really did not want to pursue this matter. We enjoyed our stay in Hilton, and we had even extended our stay there by another night. The manager gladly made the same offer to us as the other nights stay which we greatly appreciated.

Staying in Hilton in White Marsh was a great choice, for we wanted to visit DC for a few days. All the hotels in the vicinity of DC were charging over $200 a night, therefore, driving a mere distance of an hour or less from White Marsh but saving at least $75-$100 minimum in hotel expenses was a very economical way for us to visit DC but with a very fine hotel accommodation. the buffet breakfast in the hotel could add up if there are multiple persons in a family, but one can easily have excellent croissant, bagels with lox and cream cheese, or above average continental breakfast nearby in Panera (i think this is how you spell it). There are also many fast food chains and restaurants near by. In fact, there is a whole shopping mall across the high way by which the hotel is located.

This review is the subjective opinion of a Tripadvisor member and not of TripAdvisor LLC.
MaryG_from_Toronto
Toronto, Canada
6046
Reviewed 19 May 2010
Large, clean room, easy highway access

I stayed here with 3 other adults in one room for a family wedding. The rooms were spacious, clean and nicely decorated. The there was a TV, fridge, desk, chair, two double beds with soft mattresses. Even with four people inside, the room was so big, we could've stuck another person in on the floor!

The front desk staff was nice, and able to answer all our questions.The morning manager even knew how to process a Qantas airlines frequent flyer card for points. (This is a very rare request in North America, no one has heard of Qantas here).

There is a gas station down the street next to a McDonalds (if you don't want the hotel's $10.99 breakfast), as well as several malls/plazas in the area with restaurants.

It is right next to the highway, and free parking was a god send because you have to drive to get anywhere in Baltimore or Washington DC.

The free apples, coffee/tea, computers/printer, and internet were much appreciated.

My only complaint is the free cookies at the front desk. I, like everyone else, love free cookies. These were labelled as "beware of traces of nuts" but they were pure peanut butter cookies. I don't know if all Hilton Garden Inns do this, but beware if you have allergies.

Otherwise, this hotel gets mega thumbs up!

This review is the subjective opinion of a Tripadvisor member and not of TripAdvisor LLC.
greendrive
St Croix
76
Reviewed 24 November 2009
The best

The staff went way out of their way for us; over the top. Couldn't do enough for us. The bedding was wonderful. It was clean. Housekeepers were great. While there for a business meeting, there was a death in the immediate family.

This review is the subjective opinion of a Tripadvisor member and not of TripAdvisor LLC.
nakamark
Northern Virginia, Virginia
158108
Reviewed 18 October 2009
"Nice Touch" by Garden Inn - Exceeds Hilton Standards

My wife and I stayed at the property because we had an Army event at Aberdeen Proving Ground and did not want to drive back home after the event (live in Springfield, VA). Rooms were clean, cozy (a bit small), but as usual, the beds and pillows comfortable.
The gym is a small, but functional with cardio equipment. However, I believe that you can go to the gym close by - since we were staying just overnight, I did not pursue the option.

During our stay, the hotel was full of baseball fans with kids as the Orioles were playing. Despite the full occupancy of the property (the Hampton next door was also full - the parking lot was full!), the staff was quick and efficient. In fact, they were outstanding! During breakfast at the restaurant downstairs, my wife and I observed a young Soldier and his wife preparing to pay for breakfast - the waitress, noticing the obvious signs of a Soldier (short hair, dog tags, etc.), picked up the tab and comped them, thanking him for his service. An unexpected and nice jesture - indicative of the professionalism and attitude of the Hilton brand.

The Aberdeen Garden Inn opened a week after our stay at the Garden Inn - based on our experience, we may just return to the White Marsh Garden Inn.

This review is the subjective opinion of a Tripadvisor member and not of TripAdvisor LLC.
phyl59
Safety Harbor, Florida
174
Reviewed 8 August 2009
relaxing

Clean, friendly close to every thing. First rate. Front desk people very nice and helpful.
Our room was spotless as well the hotel. Came from out of town to visit friends and family felt like we were home.

This review is the subjective opinion of a Tripadvisor member and not of TripAdvisor LLC.
View more reviews
PreviousNext
1…133134135…