Too little too much - Disney's Pop Century Resort

US$224
View deal
travelup.comUS$281
Trip.comUS$229
Agoda.comUS$224
View all 16 deals
Prices are provided by our partners, and reflect total costs of the stay, including all taxes and fees known to our partners. Please see our partners for more details.
Payments made by partners impact the order of prices displayed. Room types may vary.
mrshojo19
Sugar Land, Texas
1124

Too little too much

The property at Pop Century is beautiful & well maintained. However, we were extremely disappointed with the room size. The rooms are for exactly 4 ppl. Our family consist of 5 ppl, two adults & three kids. My 11 year old is 5’4 & we couldn’t figure out how we were going to sleep comfortably without getting an additional room. The additional room idea was shattered with the price tag attached.
Housekeeping does not come by everyday. They stop by every other day.
The rooms does not have carpet.
Microwaves are available upon request.
The pools are amazing. Life jackets are available. I would not recommend if family size is more than maximum capacity(4).More

Hi there! I'm glad to see our grounds and amenities were right up your family's alley. However, it's understandably frustrating to find a lack of space to spread out. When booking through our official website, this particular location would not be available for a party of 5 because, as you mentioned, the rooms are suited to house four adults at most. I do know that sometimes reservations booked through third party sites can cause such confusion, so I'm sorry your family felt cramped while here.

I'd highly recommend on your next visit checking out Disney's Art of Animation Resort, which offers great Family Suites with plenty of room for five to stretch out and relax while still enjoying all the great amenities of staying at a Resort hotel. We hope to see you again soon for more magic!

Report response as inappropriateThank you. We appreciate your input.
This response is the subjective opinion of the management representative and not of TripAdvisor LLC
See all 12,424 reviews
Payments made by partners impact the order of prices displayed. Room types may vary.
Nearby Hotels 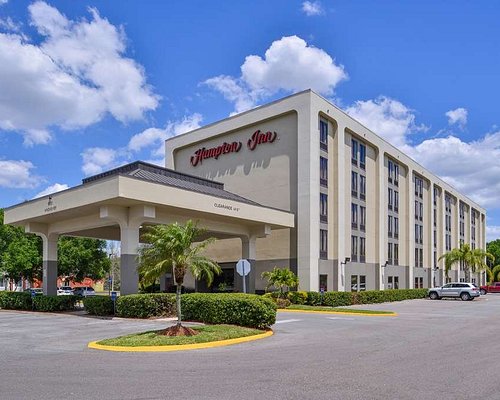 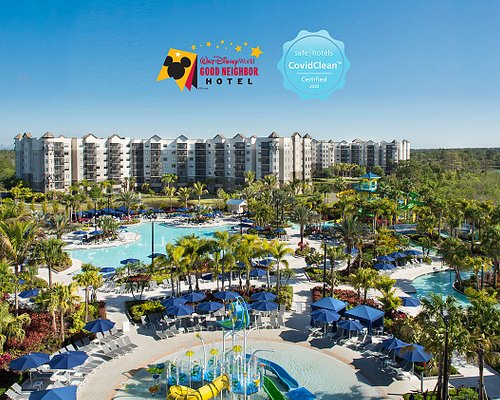 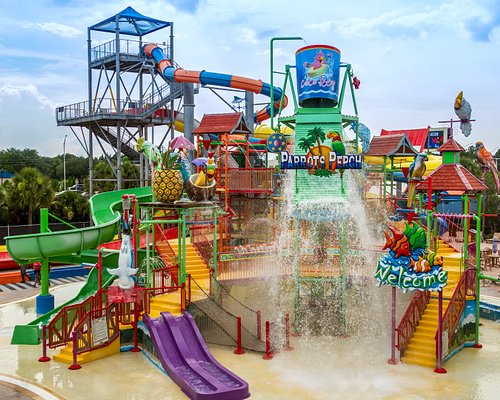 We finally got back to Pop Century and there was a giant puddle on the floor where our refrigerator used to be. No crib as requested. I called guest services and let them know, the poor maintenance guy came with a fridge and as soon as he got it in its spot the door fell right off. I mentioned I didn't want it to stay because my son could easily hurt himself on it and he said he would fix it. Thankfully we went to the pool bar and by the time we were back it was fixed, but not a great way to start our stay. The next day we went to Hollywood Studios and again, extremely long wait times everywhere. In addition, several things my son would have loved were closed, like the Little Mermaid light show. We stayed for about 2 hours and left. We requested late check out, and were willing to pay extra for my son to be able to use the Pop Century pool before we left, but for some reason we were already checked out of our room in their system by noon and they were unable to charge us to stay late because THIER SYSTEM had already checked us out. Ok fine, we checked out and left.

This review is the subjective opinion of a TripAdvisor member and not of TripAdvisor LLC
claudiacG6248PJ
Panama City, Panama
145
Reviewed 28 February 2021 via mobile
It could be much better

It was so disappointing regarding house keeping service, because of covid they change their policy and only 2 days per week someone goes into your room and only change towels and take out the trash, but only the bathroom trash, not the general one. So every room needs to leave their trash outside and the hotel looks pretty bad. They don’t even make the beds, so if you are paying the exactly same money for the room at least you need to receive that service.

The food at the restaurant was pretty average as well, they need to have more options, healthy options. And it’s expensive so, the only reason to stay at Disney hotel is for the transportation to the parks.

This review is the subjective opinion of a TripAdvisor member and not of TripAdvisor LLC
Lvtolvlife
Springdale, Utah
98200
Reviewed 23 February 2021 via mobile
Disappointing..room not clean

we love Disney properties. We come to Orlando for disney a lot...and usually will do a mix of disney and off property condos..especially in the day of covid. And now that they have stopped early and Late entry and charge for parking it is making disney hotels less appealing.

We always enjoy short stays at Pop...we start off here for a few days and move. But this last stay is keeping us away for now. we were given a room that wasn’t clean..they released it but it wasn’t finished. we brought up all our luggage and an ECV....then went to parks. Didn’t use the bathroom till later when we returned. Wasn’t cleaned. hairs and a cleaning rag still in room. Of course they offered to move us which meant a few trips so we decided to leave property. The cleaning supervisor was very dismissive and didn’t seem to care.

the positives...the beds are extremely comfy....

It’s a pain though to stay on property with mobile order and lack of options. we won’t return to disney properties till covid is over and things return to normal.

You should always be able to reply on pristine accommodations at any of our Resorts, and I'm truly sorry this wasn't your experience. I'm glad to hear that you did speak with someone about your accommodations, though it's quite concerning if these observations weren't taken seriously. I appreciate you taking a moment to share your review. I'm truly sorry that you chose to leave this Resort as a result of your experience, but I want to assure you that your concerns have been shared with our Resort partners.

I hope we will have an opportunity to welcome you back to our Resorts again in the future!

Report response as inappropriateThank you. We appreciate your input.
This response is the subjective opinion of the management representative and not of TripAdvisor LLC
162rhondaw
Pace, Florida
53
Reviewed 17 February 2021 via mobile
Disney-Our 18th Anniversary Trip

Excellent hotel for the value. Bed was comfy. Room was clean and modern. The resort is very inviting. Food was yummy. Definitely spring for the free refill cups. We loved our stay there and can’t wait to go back!

Rhonda, your photos from Disney's Pop Century Resort truly convey the fun and inviting atmosphere you experienced during your recent visit! Thank you for sharing some tips about the trip too, Refillable Drink Mugs are such a great find for those who enjoy a little caffeine to start the day or a beverage when headed to or from their rooms too.

I am so glad your 18th anniversary trip was a stellar one and I cannot wait to read about the 19th anniversary!

Report response as inappropriateThank you. We appreciate your input.
This response is the subjective opinion of the management representative and not of TripAdvisor LLC
MelanieS0405
Treasure Island, Florida
1018
Reviewed 16 February 2021
Its cute, but...

The hotel is adorable with a lot of personality. That being said, it is not one of my favorite Disney hotels. Our bathroom sink did not drain, the shower door would not stay closed during a shower unless you wedged a washcloth in it, the bed was hard as a rock and the AC turns off while you are sleeping! Also, one of the perks of staying at a disney hotel is using the transportation system. The line for the Magic Kingdom bus was huge and growing when we walked up. We noped right around.

Room tip: The 80s rooms are cute if you don't mind a walk to the front desk.
Ask MelanieS0405 about Disney's Pop Century Resort
1  Thank MelanieS0405

I'm so sorry to hear your stay here was nothing like your experience at Disney's Coronado Springs Resort, Melanie! No matter the Resort, our Guests should always expect to receive pristine, well-maintained accommodations. The state of your room is quite concerning, and I do hope you immediately contacted the Front Desk so that they could remedy this for you.

I do appreciate you taking a moment to share your review, and you can be assured your comments have been shared with the appropriate teams. We look forward to welcoming you to one of our other Resorts in the future.

Report response as inappropriateThank you. We appreciate your input.
This response is the subjective opinion of the management representative and not of TripAdvisor LLC
View more reviews
PreviousNext
1…456…2071