Not a pet friendly place as indicated - Comfort Suites Batesville

Comfort Suites Batesville
Comfort Suites Batesville
Lowest prices for your stay
Lock in the lowest price from these sites
US$124
View deal
Expedia.comUS$124
PricelineUS$124
Comfort SuitesUS$124
Hotels.comUS$124
CheapTicketsUS$124
TravelocityUS$124
View all 17 deals
Prices are provided by our partners, and reflect total costs of the stay, including all taxes and fees known to our partners. Please see our partners for more details.
Payments made by partners impact the order of prices displayed. Room types may vary.
denniskO568KT
Genoa, Illinois
2

Not a pet friendly place as indicated

No pets policy in fact, but pretty friendly according to tripadvisor. And they proudly announced not to be a tripadvisor's partner. Not surprised at all they were sitting there totally empty, with such a great pricing and policies (not really).More

Sorry but we have never been pet friendly . During this time there is an essential travel only in place for out of state residents also.
As there is no record of you staying in this hotel, it's difficult to give this hotel an honest review .

Report response as inappropriateThank you. We appreciate your input.
This response is the subjective opinion of the management representative and not of TripAdvisor LLC
See all 69 reviews
Payments made by partners impact the order of prices displayed. Room types may vary.
Nearby Hotels 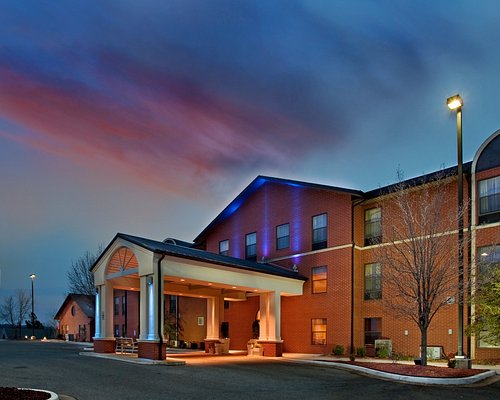 Top Rated
Breakfast included
Hampton Inn Batesville
US$131
Booking.com
View deal
Hampton.com
US$131
Expedia.com
US$131
Priceline
US$131
View all 14 deals from US$131
37 reviews
2.9 km from Comfort Suites Batesville
We compared the lowest prices from 14 websites

We stayed here on a visit to see family. To keep a long story short, we needed extra towels at around 9 pm. So we walked to the front desk as we were coming in from a day of activity. The lady at the front desk was very rude (Shelley) and said if we needed more towels we would have to bring the dirty towels down to her and she'd give us new towels. So we had to carry dirty wet towels down from the third floor to the front desk where other people were checking in and wait for her to go get us fresh towels. And then she said she'd be sure and let housekeeping know not to change out our towels the next morning. Which they did anyway. (At least the housekeepers can do their job correctly. Kudos to them!) From reading other people's poor reviews and the response they get back from the GM, it seems they would rather blame the guest than correct the problem. I'll not stay at the hotel ever again.

Response: Yes we do require the towels to be brought to us as in humid conditions so we can wash them for the next day and it does not create a musty smell in the room . I apologize for the wait while the desk was taking care of other guest . I will be looking into the issue you encountered with Shelley. Housekeeping does change out the towels when on the floor per the room to be green program posted in the room . I appreciate you bringing this to my attention .

Report response as inappropriateThank you. We appreciate your input.
This response is the subjective opinion of the management representative and not of TripAdvisor LLC
BigBusinessTraveler
23
Reviewed 4 March 2019
Extremely Poor Customer Service

I've used this hotel before, and the service has been okay but not spectacular by any means. Staff is toleratingly friendly, and the prices tend to be a bit higher here than other Choice properties. As I travel a great deal, I normally use the Choice Hotel chains. Same in Batesville, but this time I left a Bible on the table. Realizing this, I called them later that day, and they confirmed they had it. I offered to pay to ship and they said they would do so. After a week, and numerous calls, they informed me that they were too busy. Both times I was there, the counter-person could have studied law, there were so few people coming and going. I called Corporate, and they informed me that there was nothing they could do- the hotel is individually-owned. If I wanted to stay in an individually-operated site, I'd stay at the fleabag hotel down the street, that's run by people from India. My mistake to forget, but absolutely terrible customer service after that. I'll be using Hampton Inns, Hiltons, ANYTHING but Comfort Suites from now on.

The Comfort Suites Batesville ,Ar thanks you for staying with us . So your item will not get damaged during shipping I was trying to find a box to accommodate the size. We do not have boxes on hand for every item size when items are left in the room . Please do not refer to any race , etc in any way as it has no place in our hotel or business as it has no bearing on this issue of a lost item . This hotel is very fortunate to have honest employees that turn in forgotten items guests have left behind .My apologies for not sending this item fast enough to meet your expectations .

Report response as inappropriateThank you. We appreciate your input.
This response is the subjective opinion of the management representative and not of TripAdvisor LLC
ecdoan
ecdoan
82
Reviewed 13 February 2019 via mobile
Overnight Stay to watch baseball

Located close to Lyon College, plenty of restaurants of different variety really close. Hotel is very clean, the help is very friendly and the breakfast was good. Definitely will stay here again when coming to watch some college baseball!!

This review is the subjective opinion of a Tripadvisor member and not of TripAdvisor LLC.
Paul W
Traskwood, Arkansas
5311
Reviewed 9 November 2018
Cancelled a reservation at a nearby hotel because staff at this hotel was extremely helpful

Room, location, and service were all excellent. I had made a reservation at a nearby hotel (a HI location), but that desk clerk was not very helpful at all. When I called the Comfort Suites, the young lady was professional, courteous and helpful, so I cancelled the other reservation, stayed at the Comfort Suites and was not disappointed.

Room tip: You have to go past it, down the street a little, then turn at the next light and come back....
Ask Paul W about Comfort Suites Batesville
Thank Paul W

This review is the subjective opinion of a Tripadvisor member and not of TripAdvisor LLC.
597rogerh
Lexington, Kentucky
9718
Reviewed 29 August 2018 via mobile
Great...except

Very clean as compared to brands that charge more, housekeeping should be recognized for making this property very good, EXCEPT FITNESS CENTER, I’m in hotels 35+ weeks annually and would weigh 300 if didn’t work out. Always walk 2 miles first thing in morning, not here, this fitness center needs attention. Treadmill covered with other guests perspiration very gross. Not totally housekeeping problem lazy guests should clean equipment after using. Wake up rookie travelers...you mommy or Wife isn’t with you to wipe up your mess!

Thank you for the review of your stay. Housekeeping is the backbone of this hotel they take pride in their job which is hard to find . We would have been happy to take care of the fitness center had you let us know . It is cleaned daily and I apologize for the issue. I have
taken steps to have it checked more often . Again my apologies.