Review of OVER THE WATER RENTALS - footsteps from the beach 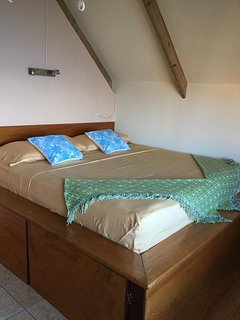 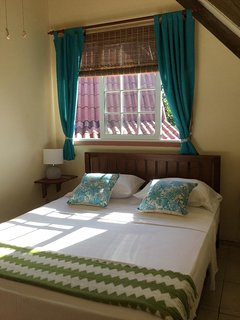 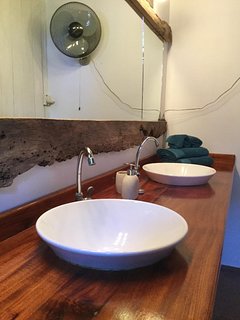 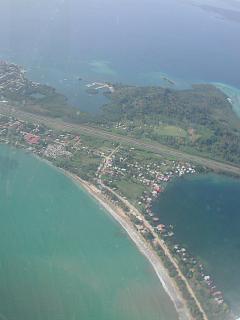 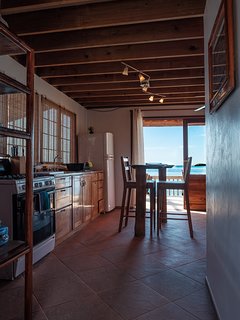 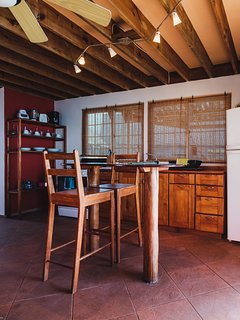 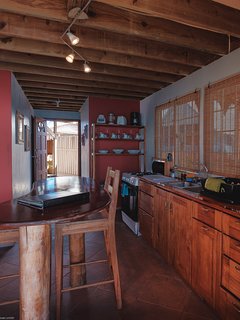 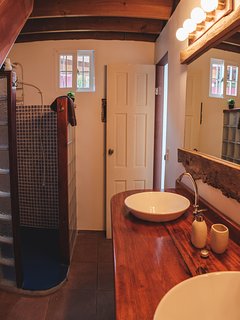 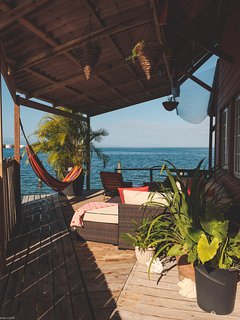 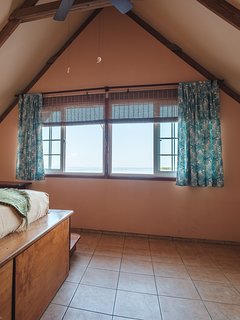 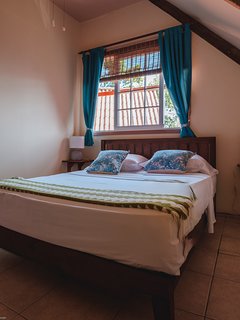 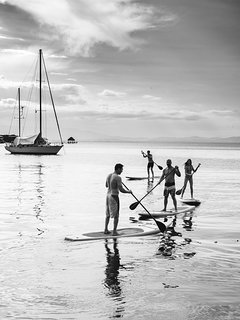 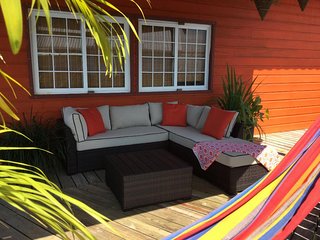 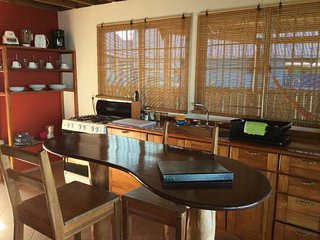 Very good - based on 27 reviews
Write a Review

Over the Water was a fantastic stay. Claudia, Denis and everyone else who helps manage the property were very helpful and wonderful hosts. The house is very clean and comfortable, with a wonderfully stocked kitchen. A market is very close by to make shopping and cooking easy. It's an easy 15 mins (give or take) walk into the main part of Bocas, or a $1 taxi ride. Yes, it's Panama - there is some poverty and garbage you may have to look at. This location isn't in the main 'tourist' area so that is not as well hidden away as it is in other areas. However, the community is safe, the people are friendly and we very much enjoyed our stay. We would return to the little purple house anytime!

Date of stay: February 2015
Travelling group: Friends
Would you recommend this hotel to a friend?   Yes.
Was this review helpful? Yes
This review is the subjective opinion of a Tripadvisor member and not of TripAdvisor LLC.
Problem with this review? Thank you. We appreciate your input.

We rented the orange house, front of the sea. It was the first time in Bocas del Toro, and we found the opinions on tripadvisor conflicting, so we opted to spend more money on a place with a lot of good reviews, this one. There was not exactly a nice idea.
You need to know how things works in Bocas del Toro: there is no public transport and there are two common ways of moving: taxis or collective transports. The prices depends on your face, if you're a tourist they try to make you spend more. Anyway moving in Bocas town costs 1 dollars with a taxi, going to a good beach like the Boca del Drago or playa de las estrellas costs 2.5 dollars and the same to go back. For the playa buff you need to spend more and more with a taxi because there is not a paved road, but you can (hardly) go there with a bicycle.
In any case the point is that everything originates in the center of Bocas, where is the public park. There, you find the collective buses to go to the nice beaches or the renting service for the bikes or even the water taxi or the organized tours.
This house on the contrary is in a slum called "Saigon" far from the center of the town, the houses of the property are nice, but the surroundings are a nightmare: the shack on the left it is like a dump: everything has been thrown into the water, trash, plastic bottles, bags, everything, not talking about the open connection of the sewers, just hope to be lucky that the wind doesn't blow in the wrong direction or you have to close the windows. The water in the front of the house is clean, but it is just inches away so we didn't even think to have a bath there. So "minutes to the beach" it says... And here we go: the nearest beach is on the isthmus, you will find only few people there because there is trash everywere... So take a taxi and go to the town, then go somewhere else.
We arrived at the local airport, and host was there waiting us, the transportation was organized by her with a collective transport, so after a large tour for the other people on the bus, we arrived at the house (that is near the airport...) and suffered the "tourist rate" of 4 dollars, note that with a taxi we would have spent exactly the half (this is what we did when we left). We stood in the house 9 days (for about 960 dollars) and in the house there was a soap bar and two rolls of toilet paper, we should have asked to the host for the change of the sheets and the towels. There was the necessary to cook but nothing for washing and ironing the clothes, if not a cord on the balcony for hanging them for drying.

We think to have spent a lot of money there, in any case the hosts (that lives just nearby in the house to the right) didn't have any problem of making a great variety of loud noises in the morning (on 8 a.m. ...) cutting woods and beginning to restore their boat just when we were there, and I repeat, spending a lot of money for the pleasure, this meant cutting woods, scraping, making noise and then that good smell of fresh paint that forces you to close all the windows with the heat of the carribbeans incumpent, that was just bad. We chose the house thinking of some tranquility, this was not what we had.

The last four days the hosts just left, so we had no one to ask if we need something, and they just said nothing. We left a message the last day on their phone to say that we were leaving, no reply, so we left leaving the keys on the table. That was just strange...

Ok, synthetically: a place in Bocas Town centre is just better, you've to go there anyway to move to a good place (if you don't want to swim in the trash) or, if you want a more quiet place, go over the isthmus.

The place here is highly overpriced for the place where it is and for what you will have.

Date of stay: September 2014
Liked best: The house was over the water andthe nice landscape
Liked least: the trash everywhere in the sorroundings
Travelling group: Compagno/a
Would you recommend this hotel to a friend?   No.
Recommended for:
Was this review helpful? Yes
This review is the subjective opinion of a Tripadvisor member and not of TripAdvisor LLC.
Problem with this review? Thank you. We appreciate your input.

3 reviews
“Lovely and spacious house with huge terrace over the water!”
Reviewed 29 July 2014 for a stay in June 2014

We were 2 couples booking the purple house over the water for one week.

First of all, we need to thank Claudia who made our staying perfect. She is a very friendly person, she was very kind through the whole process and never got tired of answering our few hundred questions. ;-) She was very helpful explaining many things, giving hints and tips and just being very nice. We really appreciate that.

The house is very clean compared to any other rentals we have seen in panama. In the kitchen there is everything what we needed for cooking and drinking. The bathroom is clean as well and has a nice looking shower and enough space to get ready.
Upstairs there are 2 sleeping rooms. One is very spacious and the other a bit smaler but with TV.

Mostly we enjoyed the big terrace. It is a really nice place to eat, read, take naps and watch the water- we mostly hang out there, even when it rained we could hang out there as it has a roof. There is a table to eat, a hammock for naps and more than enough place for anything else you desire to do there :)
The house is spacious, very clean and has everything you need.
We highly recommend it!!!

Date of stay: June 2014
Liked best: Terrace
Travelling group: Freunden
Your age range 25-34
Would you recommend this hotel to a friend?   Yes.
Recommended for:
Was this review helpful? Yes
This review is the subjective opinion of a Tripadvisor member and not of TripAdvisor LLC.
Problem with this review? Thank you. We appreciate your input.

20 helpful votes
“Great House, unfortunately alot of garbage in the water and shabby surroundings.”
Reviewed 28 June 2014 for a stay in June 2014
2
people found this review helpful

We had a great stay and Claudia was a very friendly host.
We stayed in one of the houses a bit to the back, sharing an outside deck with the neighbouring house. The house itself was really nice and clean. Because there were no other guests we could use the other decks as well, including the one overlooking the bay.

Like I said, the house itself was great! The only comments I have is that the sheets were very synthetic, which felt so uncomfortable I slept in my cotton sleeping bag. (Others had less of a problem with that though).
The other thing was that the kitchen supplies are measured to 4 people exactly, meaning you're doing dishes constantly. A double set (8 of everything) would have been a bit more convenient.

The surroundings of the house are something else, though. Most houses looked like they could collapse at any moment and there is trash everywhere, in the sea as well. Sewers have an open connection to the sea, so even though the water is reasonably clear you're swimming in a mix of sewer water, remnants of food and loads of plastic.

There is a beach within walking distance, but that was only good for surfing. We can recommend starfish beach and Bastimentos for trips!

Also, there are two supermarkets within walking distance. Not loads of variety, but that is to be expected :)

Date of stay: June 2014
Would you recommend this hotel to a friend?   Yes.
Was this review helpful? Yes
This review is the subjective opinion of a Tripadvisor member and not of TripAdvisor LLC.
Problem with this review? Thank you. We appreciate your input.

We had the Orange house on the water. Great deck, opens up nicely for a breeze cool and nice for hosting people. Nice place, nice people and had a great stay there. Thanks Claudia.

Date of stay: May 2014
Travelling group: Friends
Would you recommend this hotel to a friend?   Yes.
Was this review helpful? Yes
This review is the subjective opinion of a Tripadvisor member and not of TripAdvisor LLC.
Problem with this review? Thank you. We appreciate your input.
Previous Next
1 2 3 4 5 6
Updating list...
Do you own a holiday rental? List it here.

Looking for a place to stay in Bocas Town?
View all 18 holiday rentals