US$427
View Deal
US$352
View Deal
Hotels.comUS$447
eDreamsUS$352
Agoda.comUS$349
View all 15 deals
Prices are provided by our partners, and reflect total costs of the stay, including all taxes and fees known to our partners. Please see our partners for more details.
Payments made by partners impact the order of prices displayed. Room types may vary.
Singaporetraveller00
1

Visited SoSpa during my CNY Staycation and had a wonderful experience at my facial. Thanks to Fatimah for her professional hands and receptionist Nura for the friendly welcome. Sospa is definitely recommended.

Trip type: Travelled with family
See all 3,398 reviews
Payments made by partners impact the order of prices displayed. Room types may vary.
Nearby Hotels 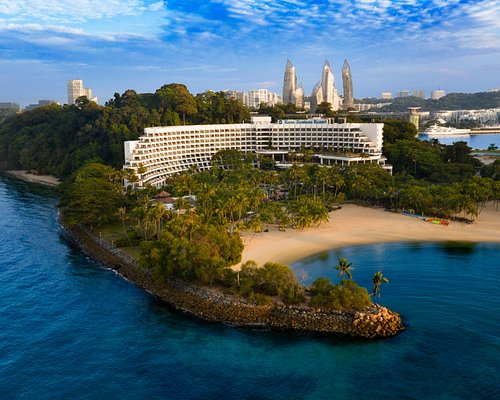 Taking safety measures
We compared the lowest prices from 14 websites

Booked Sofitel Sentosa Resort and Spa for 2 nights to celebrate my partner’s birthday. Availed of the Retreat to Sanctuary promotion and it was overall a good stay.

Check-in was efficient, we were allowed early check-in and was given an upgrade to a Junior Suite! It was a nice touch as Farah showed us the direction to our room and did a quick introduction of the hotel grounds.

The room was indeed spacious, clean and comfortable. Although the age is starting to show, it was still a pretty good suite. I was surprised though, that the toiletries which were usually by Lanvin (or Hermès) for Sofitel, were replaced by another brand (which I’ve not heard of before).

Breakfast at Kwee Zeen and dinner at The Cliff were alright. The food served were pretty standard and nothing much to shout about. Service was OK and didn’t encounter much issues, though it could be friendlier and more attentive.

The So Spa was another bit of a let down. The facilities, although adequate, doesn’t seem to be properly maintained. Age is definitely showing and the overall ambience is not as relaxing, not as good as expected. Service was alright, the massage was relaxing, but compared to that you can get overseas, I feel that it can definitely be improved.

The overall feel at the resort and spa were both a good getaway from the city. It did feel that I was away from Singapore, but looking around the hotel, it is screaming for proper maintenance and maybe some refurbishing. Spending time around the pool was really lovely though. It was enjoyable.

I think another point to improve would be the One Touch service. There were a couple of times where it was difficult to get through (had to call a few times before it was picked up) although service was prompt once it is answered. Another issue was you aren’t able to request for ice (or probably room service?) after the restaurant has closed. So probably have to try to request early.

The 3D2N staycation was overall relaxing and was a good break. It would have been magnifique if the hard and soft products were better maintained, given the Sofitel branding.

This review is the subjective opinion of a TripAdvisor member and not of TripAdvisor LLC
do_be_kind
Singapore, Singapore
7463
Reviewed 3 weeks ago
Aged and non functional room

Just checked out of a staycation here. Stayed at Tranquility wing Level 4. Check in via Accor desk by Natasha who feels more like dealing with a robot than a person. She couldnt even answer basic questions re shuttle route/timing, can only give what feels like a scripted response and not answering my questions at all.
Room size is average at best, the biggest downside is many non-functional aspects of room, eg half of wall sockets were faulty (cant charge phone) and the aircon control was faulty, pressed on minus sign and temp can either go up or down or aircon turned off inconsistently, caused me some stress in middle of night when i tried to lower temperature but the temp went up instead.
KweeZeen was closed for dinner and we were routed to the Cliff with limited asian menu. we ended up having fries at le bar instead.
Consolation was the nice breakfast in outdoor area and the good service at LeBar despite being manned by 1 person only.
This hotel certainly dont deserve a 5 star rating, more a 3 star.
Guests dont need to check in via TraceTogether at all, no one will care in the hotel lobby if we check in or not. And given the layout, anyone can also walk in & out of bedroom bypassing the main lobby, hence, can also bypass TraceTogether which i find concerning.

This review is the subjective opinion of a TripAdvisor member and not of TripAdvisor LLC
mostlyharmless
Singapore, Singapore
478322
Reviewed 3 weeks ago
Green and spacious

One night stay in standard room. Check-in was uncomplicated but perhaps lacking a little warmth, as compared to other hotels. The room was spacious and had a view of the gardens. Decor is unusual and a little eclectic, but functional, if showing a little wear and tear. Rooms came with TWG teas and Nespresso coffee. Breakfasts were generous, with a choice of (almost) everything on the a la carte menu. Service at breakfast was functional rather than friendly, and it took a very long time to get a refill of coffee. Grounds are well laid out but slightly less verdant than I would have expected, and right next to the hotel there is a very large construction site which quite de-spoils the garden feel. Overall, a reasonable if unexciting stay. Given the current prices on offer, I would generally choose another hotel, unless the deal was very good.

Probably the worst hotel we encountered so far. I booked a prestige suite to celebrate my wife’s birthday and it turned out to be a complete disaster.
Firstly, we were given a room facing some construction. The knocking and drilling were generating so much noise that we could hardly rest. Hotel should really do their due diligence and not let guest stay in such room.

Additionally, on the website they stated that they have “dedicated team ambassadors” which would assist 24 hours a day. The in room dining closes at 12 with last order at 11.45pm. My wife requested a bucket of ice from them at 11.50pm and was coldly rejected. Staff by the name of Eric was very rude, he mentioned that the ice machine was already closed and there are no ways he can get ice for us. He demanded us to be “understanding”. Ironically, taking into consideration of location of the hotel, at an isolated corner of Sentosa, and the nearest shop that we can get ice is at least 10 mins drive away, I guess they should be the “understanding” one.
I made my way down to the restaurant personally to check if he was speaking the truth, guess what, i was readily given a bucket of ice. I’m puzzled if the staff was speaking the truth or he was just too plain lazy.

Additionally, we wrote an email feedback to them on this incident and there were no reply from them.

Thank you for making my wife birthday a memorable one. It will be the last time we will be patronising your hotel.

Review collected in partnership with Accorhotels.com
This business uses tools provided by Tripadvisor (or one of its official Review Collection Partners) to encourage and collect guest reviews, including this one.
Ask JaredYong2021 about Sofitel Singapore Sentosa Resort & Spa (SG Clean Certified)
Thank JaredYong2021

This review is the subjective opinion of a TripAdvisor member and not of TripAdvisor LLC
melissaaF8016DH
Singapore, Singapore
1
Reviewed 3 weeks ago via mobile
Nice morning for mu husbands bday

Couple massage and lunch at the “conscious dining” restaurant beside the pool. Good way of starting our day.
Place is a bit old. Service good, but not top.
Massage very professional. Overall we had a very good experience.