The Melanesian Port Vila
Lowest prices for your stay

US$101
View deal
US$160
View deal
Expedia.comUS$101
eDreamsUS$160
Agoda.comUS$103
View all 14 deals
Prices are provided by our partners, and reflect total costs of the stay, including all taxes and fees known to our partners. Please see our partners for more details.
Payments made by partners impact the order of prices displayed. Room types may vary.
JudefromAus
New South Wales, Australia
2723

We stayed here on the first and last nights of our holiday in Vanuatu as it was closer to the airport. On both nights we had to leave early for flights the next morning so we weren't there for the allocated times for breakfast. Although breakfast is included they flatly refused to give us anything, not even a piece of fruit to have in our room for the next morning.

See all 387 reviews
Payments made by partners impact the order of prices displayed. Room types may vary.
Nearby Hotels 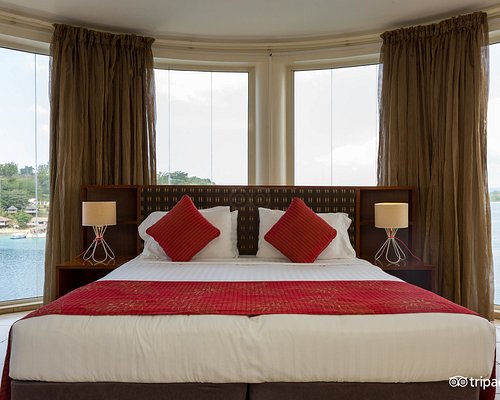 Grand Hotel And Casino
US$132

Expedia.com
View deal
Free cancellation
Pay up to 12X
Hotels.com
US$132
Trip.com
US$119
Booking.com
US$138
View all 16 deals from US$119
637 reviews
0.6 km from The Melanesian Port Vila
We compared the lowest prices from 16 websites 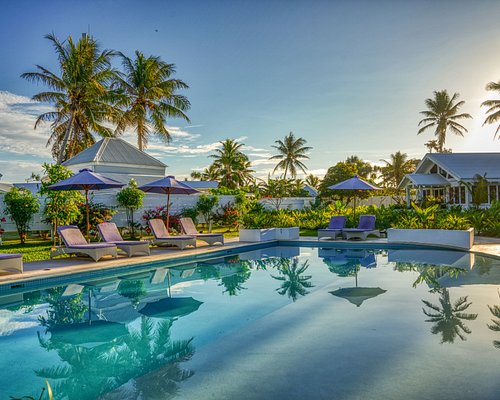 Taking safety measures
We compared the lowest prices from 10 websites

Hotels.com
View deal
Free cancellation
Pay up to 12X
Expedia.com
US$69
Agoda.com
US$57
Priceline
US$63
View all 13 deals from US$57
418 reviews
1.9 km from The Melanesian Port Vila
We compared the lowest prices from 13 websites
Breakfast included
Erakor Island Resort & Spa
US$258

Hotels.com
View deal
Pay up to 12X
Expedia.com
US$258
Trip.com
US$255
CheapTickets
US$258
View all 9 deals from US$255
911 reviews
2.4 km from The Melanesian Port Vila
We compared the lowest prices from 9 websites
Island Magic Resort
US$112

Hotels.com
View deal
Pay up to 12X
Expedia.com
US$275
Agoda.com
US$248
eDreams
US$303
View all 15 deals from US$248
154 reviews
4.5 km from The Melanesian Port Vila
We compared the lowest prices from 15 websites
The Terraces Boutique Apartments
US$191

Expedia.com
View deal
Free cancellation
Pay up to 12X
Hotels.com
US$153
Trip.com
US$151
ZenHotels.com
US$159
View all 14 deals from US$150
760 reviews
3.4 km from The Melanesian Port Vila
We compared the lowest prices from 14 websites
Breakfast included
Sunset Bungalows Resort
US$189

Since the complimentary breakfast is little more than a snack for a bird, I ordered the Melanesian breakfast (eggs, sausage, mushrooms and bread). A very bad decision that gave me with two days of stomach cramps due to swallowing a bite of the half cooked, rotten smelling sausage. Although the hotel itself is ok, due to that terrible breakfast they deserve a terrible rating.

Thank you for your feedback.

Sorry to hear about your bad experience with us.
This isn't a feedback we are used to hearing.
We take all comments serious and try to improve on it.
I will discuss with the Kitchen Department and review this.

Once again i apologies for this and hopefully give us another try when your around the area.


Report response as inappropriateThank you. We appreciate your input.
This response is the subjective opinion of the management representative and not of TripAdvisor LLC
Linda W
Kalamunda, Australia
4818
Reviewed 14 February 2020 via mobile
Not what I needed

Came to Vanuatu for my cousins birthday which also became a surprise wedding. On the way back to Australia, my cousins/friends stayed here at the Melanesian. At first I thought it was a really nice place. I arrived here wanting to have a nice bath and relax in bed watching tv. Great..they have several channels to choose from. Wrong. There is only 3 channels and they are in French. The young man that came to fix my tv said NO they don't have those channels, only the French channels. I told him I don't speak French and there should be other channels, he smiled sweetly and said "No, only French channels" Enjoy your stay, and left.
So anyone wanting to relax and watch tv.. learn French first.

Thank you for your feedback.

My apologies for what you have to come across with the TV Channels.
All positive and negative comments are welcome so we know where to work on.

All of our room has English and French channels.
I checked with reception and there was problems with the channels and i am sorry for this.

Once again i apologies for this and we will do our best so it doesn't happen again.

Thank you for staying with us and hope to see you next time.

Report response as inappropriateThank you. We appreciate your input.
This response is the subjective opinion of the management representative and not of TripAdvisor LLC
Passenger523798
32
Reviewed 27 January 2020
"Wonderful Service"

I wish to thank the manager Rotha and the entire staff at THE MELANESIAN HOTEL, who served our tour team of 20 with complete generosity. Our experience with your facility for 12 days Rotha was as if we were at home among family, (being the staff who took care of us). In with all of our demands, there was nothing that was too hard for you & your professional team. There was always a solution, an answer, and a resolve to any problem we were concerned with. Rooms were spacious, location was central, nothing was too far, everything you needed was on site, and it was the staff that made it a complete success. A HUGE thank you from all of the tour team. With Christian love

It is very uplifting to read such beautiful feedback.

We greatly appreciate your thoughtful words. We will pass it on to the management and other Hotel staff to read.

Thank you for staying with us and we hope to see you next time.

Report response as inappropriateThank you. We appreciate your input.
This response is the subjective opinion of the management representative and not of TripAdvisor LLC
RantingJules
Melbourne, Australia
4732
Reviewed 27 December 2019
Comfortable but lacks character, bad food

When our flight was "indefinitely delayed" we were put up at The Melanesian Port Vila by the airline for one night, including meal vouchers.

Ambience wise, you feel like you're in any budget hotel in any 'first world' country on the planet. The rooms are clean and comfortable, though they lack character apart from the wood accents throughout. The air conditioning was bliss, though. Even though the hotel is in a busy area, it's surprisingly quiet. Be warned, though - there are stairs to get everywhere including the restaurant so it's probably not a suitable place for those with mobility issues.

Speaking of the restaurant, I'm sorry to say this is the one big negative of the place. The food is terrible. The quality is very inconsistent even with the same menu item. My husband's lunch was fantastic (mine was awful - stay away from the chicken burger), so I decided to order the same thing for my dinner. Unfortunately, mine ended up being very over-cooked and tasted awful. And you won't get anything even resembling local fare there - it's just really bad quality western food.

In summary: the best way I can describe this hotel is that it's suitable for two kinds of travellers: People who need a quick and comfortable stopover, or people on a budget who would prefer the comforts of western hotels at the end of the day. If you're looking for a place with local character and good food, do yourself a favour and splurge on one of the many fabulous resorts available in Port Vila. And regardless of your travel style, don't bother with the restaurant.

Thank you so much for taking your time to write this review ,
We appreciate all negatives and positives response to make us improve

I am happy to hear that you appreciated the cleanliness of the room and location of the hotel .
Thank you again for your suggestion as well,

However , I am very sorry to hear that the food was terrible , this is surely not what we would like to hold ourselves to when it comes to the quality of our service. I am going to reach out to the department responsible and see what we can do to improve it . Please let us know if you're planning to come at the Melanesian hotel in the future , will make our best to improve this service.

Thank you again and kind regards

Report response as inappropriateThank you. We appreciate your input.
This response is the subjective opinion of the management representative and not of TripAdvisor LLC
jwtravellers
Canyon Lake, Texas
5524
Reviewed 24 December 2019
Good Service

This is not the fanciest place in Port Vila but it was pretty clean and in a good location if you want to walk in the city. The front desk staff is excellent. They are really nice and were very helpful. The rooms could use some updating. But for the price it's not a bad place.

Thank you for your review.

We appreciate all comments regarding the Hotel and Thank you for your comments on the staff.

Thank you for staying with us and hope to see you next time.

Report response as inappropriateThank you. We appreciate your input.
This response is the subjective opinion of the management representative and not of TripAdvisor LLC
View more reviews
PreviousNext
12…65