We didn't want to spend our whole holiday budget on classy accommodation so we chose Cedar Court. It is what is and if you are looking for value for money accommodation Cedar Court fits the bill.
Our unit was good and spacious with a good flow of air through the unit.
Management and staff were welcoming and helpful.
Its a bit dated but good value and well located

Room tip: Get as far back from the main road as you can
See all 142 reviews
Payments made by partners impact the order of prices displayed. Room types may vary.
Nearby Hotels 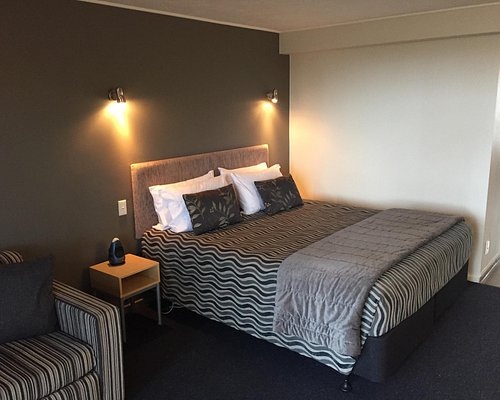 Expedia.com
View deal
Free cancellation
Reserve now, pay at stay
Hotels.com
US$130
Booking.com
US$130
Priceline
US$130
View all 16 deals from US$130
290 reviews
3.6 km from Cedar Court Motel
We compared the lowest prices from 16 websites
Harbour View Lodge
US$212

Expedia.com
View deal
Free cancellation
Pay up to 12X
Tripadvisor
US$134
eDreams
Hotels.com
US$134
View all 16 deals from US$134
304 reviews
2.9 km from Cedar Court Motel
We compared the lowest prices from 16 websites
Palm City Motor Inn

Reasonable price, the place was nice and clean. The kitchen had all the amenities one could need. Free parking outside. Close to the center of Napier, 5min by car. Walkable distance from the port. We had a nice stay.

This review is the subjective opinion of a Tripadvisor member and not of TripAdvisor LLC.
674alr
Moose Jaw, Canada
2
Reviewed 25 January 2019 via mobile
Not good

The place was filthy. Split milk on the kitchen floor and wiped it up with a tissue that became black. Carpet was no better. White socks beacame black. Road noise was disturbing. Was not good value. AVOID!!!

This review is the subjective opinion of a Tripadvisor member and not of TripAdvisor LLC.
NZsimond
Auckland, New Zealand
20937
Reviewed 14 January 2019
4 nights in January

My wife and I booked here as a budget friendly option while visiting for a concert and thought we would spend a few days looking around. A handy location at the entry to Napier via the Taupo/Napier road.
We stayed in Unit 2 which had a double/queen + 2 single beds in a 1 bedroom/studio configuration. They were a soft but comfortable mattress and the unit was fairly spacious with a kitchen which included double hob, microwave and fridge (no oven), TV with Sky decoder, dining table + chairs and a two seater couch. The bathroom contained shower, vanity and separate toilet.
The room was dated and in parts a little tired, but was clean and comfortable and for the price had everything we really needed for a few days as a home base. The bonus was a great walking track across the road to Ahuriri and it was a short walk to Westshore beach.
The downsides were. No air conditioning which would have been welcomed with the 30+ degree days. The pedestal fan supplied helped along with opening windows. The other drawback was the proximity to main arterial routes meant a lot of traffic (cars and trucks) day and night. Ear plugs would be recommended to help muffle this as it did interrupt our sleep.
Friendly staff and a good price for a budget friendly option if you can deal with some traffic noise.

This review is the subjective opinion of a Tripadvisor member and not of TripAdvisor LLC.
JosieA290
198
Reviewed 7 November 2018
Value for money

Was in a great location. Manager was very pleasant and helpful. Beds were comfortable and great value for the price. Would definitely stay here again. The Motel was handy to most amenities and it was clean. Stayed here Labour weekend 2017 for a Birthday.

This review is the subjective opinion of a Tripadvisor member and not of TripAdvisor LLC.
Graeme H
Hervey Bay, Australia
4130
Reviewed 6 April 2018
Friendly Staff

Had a 2 night stopover at this Motel. Check in was easy as everything was ready for us when we arrived. Manager gave us the tour, plus advice of where to eat and what to see in Napier. The Motel is an older establishment, but is in great repair. The rooms are a nice size and well equipped with small Kitchenette. Great shower and a comfortable bed. There is no Security Screening in NZ, but a nice feature of this Motel were the rear windows that could not be opened totally, allowing breezes into the room without sacrificing security. On our second morning the girls came through to clean our room and by the time they left we felt we'd been friends all our life. Only improvement I could suggest would be a few new pillows as mine were rather thin, but that is a small complaint, if considered a complaint. Would definitely suggest this Motel to anyone seeking a good, clean budget Motel while in Napier. Motel is across the road from an inlet, so you even get a sort of water view when the tide is in.