US$43
View deal
Hotels.comUS$56
eDreamsUS$49
travelup.comUS$80
View all 13 deals
Prices are provided by our partners, and reflect total costs of the stay, including all taxes and fees known to our partners. Please see our partners for more details.
Payments made by partners impact the order of prices displayed. Room types may vary.
Helen B
49

These apartments were lovely. The reception staff are polite. The on site pool restaurant is lovely. Fresh cooked meals. Not cheap but very good quality. Fab pools - we overlooked the quiet one and it was so peaceful. The other pool created lots of happy memories for my two children, aged 11 and 7. The footy pitch was a godsend for my little boy who is. Football fanatic.
20 minute walk in villamoura at night. Fan place. Loved it all. The beach was gorgeous - get a taxi to nosolo beach bar and have the best lunch with a live dj. Taxis home are around 4 to 5 euro. We never walked home at night.
My only one single criticism is that there is no on site shop. That would have made the holiday perfect.
When you do stock up don't go to the spar Just carry on a few minutes later and go to Jaffers. So much better and a little cheaper.
Vilamoura is the most expensive place I've ever been to so bring lots of euros. But an amazing holiday.More

Show less
Trip type: Travelled with family
See all 611 reviews
Payments made by partners impact the order of prices displayed. Room types may vary.
Nearby Hotels 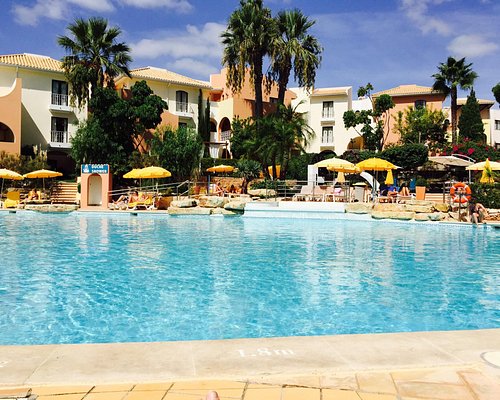 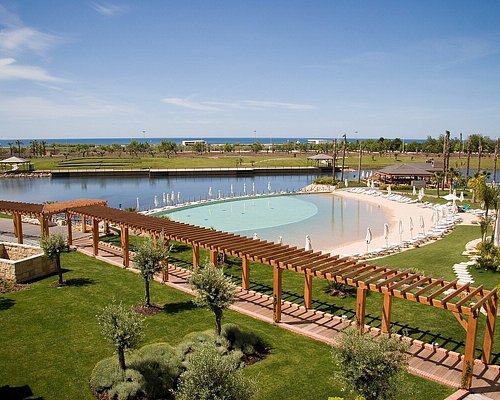 Priceline
View deal
Free cancellation
Agoda.com
US$959
FindHotel
US$961
StayForLong
View all 18 deals from US$959
2,000 reviews
1.7 km from Pinhal da Marina
We compared the lowest prices from 18 websites 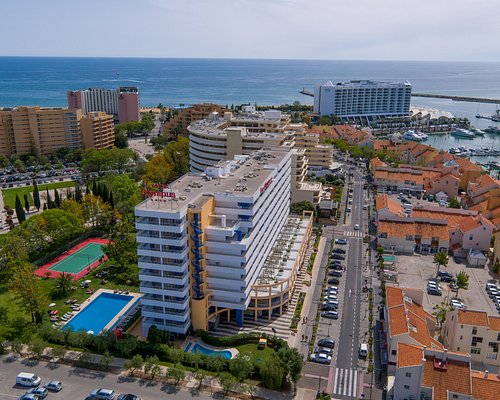 eDreams
View deal
Booking.com
US$79
FindHotel
US$61
Priceline
US$87
View all 16 deals from US$61
426 reviews
1.0 km from Pinhal da Marina
We compared the lowest prices from 16 websites
Hotel Apartamentos do Golf
US$28

Expedia.com
View deal
Free cancellation
Pay up to 12X
Booking.com
US$33
Agoda.com
US$24
Hotels.com
US$28
View all 14 deals from US$24
458 reviews
2.7 km from Pinhal da Marina
We compared the lowest prices from 14 websites
The Residences at Victoria Algarve

Taking safety measures
We compared the lowest prices from 15 websites
Top Rated
Four Seasons Vilamoura
US$104
Booking.com
View deal
Expedia.com
US$100
FindHotel
US$82
Priceline
US$118
View all 14 deals from US$82
1,242 reviews
0.9 km from Pinhal da Marina

We stayed here in August, I would say after reading the reviews, I would not agree with comments that the apartment is very clean. It was clean but could have been better, during our stay the floors and the bathroom were only cleaned,no tables dusted and there were finger prints on the kitchen units and hob. The pools were lovely,the restaurant staff were very nice and the food was lovely and well priced. The landscaping needs to be improved. There were a lot of weeds running through the plants and the exterior of the resort looked very shabby compared to the other properties in the location. The apartment is dated and the bedroom was awful, in fact it lowered my mood.

This review is the subjective opinion of a Tripadvisor member and not of TripAdvisor LLC.
_liz_goodhead
Greater London, United Kingdom
31
Reviewed 24 August 2018
Lovely staff

I have never written a review before but after our 4th visit to this lovely complex I feel that we have found a reasonably priced, spotlessly clean and convenient hotel in a great location It is within easy walking distance from the marina but far enough away for the peace and quiet that we like The 2 pools are great We normally sit by the adult one and always plenty of sun beds and shade, which was very necessary this year and there is no need to get up at the crack of dawn to put towels out

This review is the subjective opinion of a Tripadvisor member and not of TripAdvisor LLC.
Sherri M
23
Reviewed 17 August 2018
Great location, friendly staff but apartment disappointing

We stayed at the apartment for a week. i'll try to make this as fair as poss:

PROS
- great location. the area is beautiful and the complex is only a few mins away from the marina. there's also a great supermarket called Continente which has everything you could ever really need. don't bother going to Lidl there wasn't even beans!
- attractions are fairly close by. Aquashow, Zoomarine and the Beach are all within 20m drive. You can also use a bus which apparently stops outside the hotel every 20m but we hired so didnt use that. The hotel reception can also call a cab for you if you need.
- the apartment had the basic necessities - kettle, toaster and a big enough fridge freezer. they also had a clothes airer on the balcony which was useful to dry stuff on.
- a big balcony which had a dining table and two loungers came in handy.
- quite spacious and TV had a couple of english channels we could watch but we were out most of the time so not used that much.
- the staff were quite approachable, friendly.
- there are two pools, the main one is fairly big and we enjoyed using it.

- our apartment was dated, dark and especially the bedrooms were poorly lit. the hallway also poorly lit.
- the blankets were old fashioned, a weird brown colour which was not appealing to use.
- at night the toilet seemed to smell? there was urine stains on the floor in front of the toilet which you can also smell. not very nice.
- sheets and towels were not changed regularly enough, think we were given fresh towels twice in a week and the sheets were only changed once.
- breakfast options extremely limited, we cooked breakfast for ourselves the whole time.
- the dishwasher had a very odd unpleasant smell, we didn't use it.
- the electric hob was constantly cutting off - you had to press a button to restart it- very annoying!

Note:
Not strictly to do with the hotel but worth noting If you are driving it can get quite congested on the way to the marina at night. Parking is difficult to find and you have to pay 1 euro 20c per hr until midnight.

Will def return to Vilamoura but use a different hotel.

This review is the subjective opinion of a Tripadvisor member and not of TripAdvisor LLC.
Georgina S
3
Reviewed 14 August 2018 via mobile
Tennis lessons

While on holiday in the area we were lucky enough to receive tennis lessons from Andre Ferrera. Andre puts great energy into his lessons and they are fun for all ages (including my moody teens!). Thanks to Andre we have all improved our game and feel much fitter too. He has inspired us to carry on playing now we are home.

This review is the subjective opinion of a Tripadvisor member and not of TripAdvisor LLC.
aypr22
Rotherham, United Kingdom
2149
Reviewed 17 July 2018 via mobile
Nice resort

I stayed here with friends for a long weekend. Arrived about 9pm and was shown to my room by the lady on reception and shown around it. The room was spacious and had a large kitchen, balcony, bathroom and bedroom with dining area. There was also a free of charge safe. Cleaning was daily and towel changes. The pool was clean and comfortable heat. Food was nice at the bar although we ate out mostly. Taxis were always quick and I’d highly recommend the harbour in Vilamoura for eating and drinking it has some lovely establishments although can be a bit pricey. Apparently albaferra is cheaper but we didn’t go there. Had a lovely weekend would return.

This review is the subjective opinion of a Tripadvisor member and not of TripAdvisor LLC.
View more reviews
PreviousNext
1…141516…