“Perfect!!!”
Z01GXzI2X1NFdA==
other travellers have booked this property

Review of A ROOM WITH A VIEW 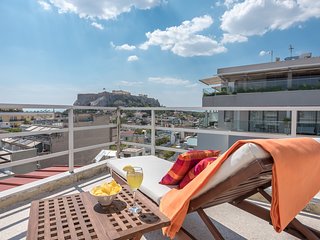 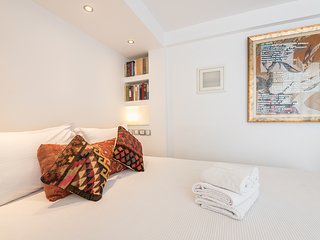 Excellent - based on 8 reviews
Write a Review

Me and my boyfriend have just returned from a 4night / 5 day trip to Athens, and we stayed in Nausikaa's apartment! I can't be anymore happy. Initially we weren't too sure as there were no previous reviews -this is why I am leaving such a large review!

The apartment was very central! Round the corner from syntagma square - which has direct connections to all major sights and to the port. The area itself is full of shops and restaurants so finding somewhere for dinner was easy. There was a bakers just across the road which sold fresh breads and massive bottles of water (very cheap compared to the busier/tourist areas) which we went to most mornings :) I think the apartment was on top of a business building - not too sure but we were on the 8th floor (penthouse!!) with an elevator to the 7th floor and a very very small flight of stairs to the apartment. We rarely saw anyone else, the occasional person in the lift if we left early and the lady who was down at reception - she was lovely and friendly, she spoke little english but was always asking if we were OK and happy with everything, we also have the keys to her when we left.

The apartment itself was lovely - clean, comfortable and had a spectacular view! Sitting on the bed and you can see the acropolis! The balcony provided an incredible and un-interuupted view of the acropolis, there was a little table and two chairs so we were able to sit on the balcony in the evenings and enjoy the view.
The bed was very comfortable - however, there were only two very thin pillows. It might just be my personal preference of lots of pillows but it would've been nice to have a few more as we ended up sharing the two pillows between us (piling them up to one thicker pillow). We were given a complimentary pack with coffee and fruit teas, (I couldn't find anywhere that actually sold English breakfast tea) There are mugs, espresso cups and a coffee machine and some glasses and wine glasses. However there is no cutlery etc(which we expected there wouldn't be as there is no kitchenette) However we bought a bowl and some cutlery for cereal and making sandwiches for our day trips at a nearby shop. The air con was wonderful too - not very important but it was so hot it was nice to be able to cool down. The television had multiple channels, but we mainly had it on CNN to get the world news. There was wifi but my phone was unable to connect to it, however my boyfriends phone could connect but it was slow, I'm guessing its because we were at the top of the building, but it was perfect for downloading some street maps onto his phone.

All in all the apartment was perfect, excellent central location with beautiful views. Nausikaa was really good with returning my emails, I asked a lot of questions and each one was given a great response. We were told that our damage deposit would be refunded upon departure either via paypal or in cash from the lovely lady downstairs, ours was refunded during the holiday via paypal which was very handy for some extra spending money on the last day! We had a perfect holiday - Thank you so much!!!

I have uploaded a few pictures - however these were taken on our final day once we had packed up so it doesn't look as nice as when we arrived. When we arrived it looked exactly as the pictures provided show :)

Date of stay: September 2013
Liked best: The view from the balcony and the location
Travelling group: Spouse/Partner
Would you recommend this hotel to a friend?   Yes.
Recommended for:
Was this review helpful? Yes
This review is the subjective opinion of a TripAdvisor member and not of TripAdvisor LLC
Problem with this review? Thank you. We appreciate your input.

Date of stay: September 2019
Was this review helpful? Yes
This review is the subjective opinion of a TripAdvisor member and not of TripAdvisor LLC
Problem with this review? Thank you. We appreciate your input.
Previous Next
1 2 3
Updating list...
Do you own a holiday rental? List it here.

Looking for a place to stay in Athens?
View all 1,560 holiday rentals