Travelocity
Orbitz.com
Prestigia.com
View all 15 deals
Prices are provided by our partners, and reflect total costs of the stay, including all taxes and fees known to our partners. Please see our partners for more details.
Payments made by partners impact the order of prices displayed. Room types may vary.
U3493BCbillj
22

Took 2 children (11 & 13 ) on their 1st holiday abroad. I have to say the tis hotel was a very good choice for a family hotel. The rooms were clean and well maintained, as were the gardens and pool areas. There were lifeguards on each of the 3 pools so it was really safe. The food and beverages were of a good standard and there were activities and entertainment every day. It was a good bonus to have free entrance to the adjacent water park included with our all inclusive package. I would recommend this as a high standard family hotelMore

Thank you very much for your review.

Report response as inappropriateThank you. We appreciate your input.
This response is the subjective opinion of the management representative and not of TripAdvisor LLC
See all 1,556 reviews
Payments made by partners impact the order of prices displayed. Room types may vary.
Nearby Hotels Grupotel Macarella Suites & Spa
US$81
Booking.com
View deal
Free cancellation
Reserve now, pay at stay
Hotels.com
US$81
Trip.com
US$73
Expedia.com
US$81
View all 16 deals from US$73
807 reviews
8.6 km from Globales Los Delfines Hotel
We compared the lowest prices from 16 websites 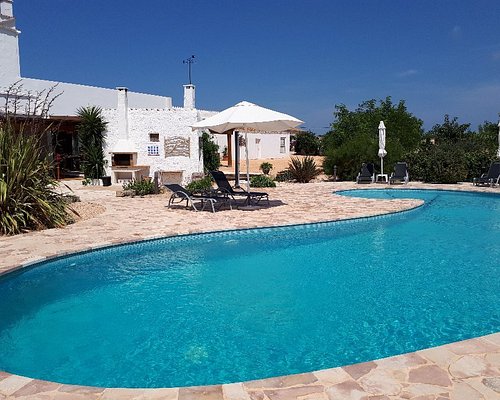 Breakfast included
Agroturismo Son Juaneda
US$119
Booking.com
View deal
Hotels.com
US$119
Expedia.com
US$119
eDreams
US$119
View all 13 deals from US$119
83 reviews
5.5 km from Globales Los Delfines Hotel
We compared the lowest prices from 13 websites

We was very apprehensive about booking a holiday this year due to the current worldwide situation, but are so glad we did.

We stayed in a room in the main hotel.It was quite small for 3 people,but as we only use the room to get changed in the evening and to sleep in, it wasn't a problem for us.

The Hotel itself was clean and tidy. There were sanitisers at all the entrances and face masks had to be worn if you were inside the building.

All the staff were polite and friendly, they seemed genuinely pleased to have you there

There are two swimming pools and a toddlers splash pool with themed slides. All pools had lifeguards. You also had access to a larger waterpark just outside the hotel,if you are all inclusive you get drinks and snacks included in waterpark.

The restaurant was clean. The food was buffet style were you helped yourself. There were a few different choices of food as expected with a small hotel.

However you drink out of paper cups round the pool during the day (that's fair enough) but I didnt like the plastic beakers from the bar in the evening, but the bar was right by the pool so I guess it's a difficult one.

Overall the hotel was better than we anticipated.

I would recommend this hotel for a family holiday

Thank you very much for your lovely review.

Report response as inappropriateThank you. We appreciate your input.
This response is the subjective opinion of the management representative and not of TripAdvisor LLC
rogerwF9474SW
1
Reviewed 10 August 2021
July 2021 family holiday

We stayed here from 27.07.21/02.08.21 as a group of 11 - 7 adults and 4 children, aged between 5/9. The staff were friendly and helpful throughout our stay, the rooms well furnished, spacious and clean.
The presentation & quality of the food, breakfast, lunch and dinner was excellent! Well done to all involved with the catering!
The Hotel is perfect for a family holiday - The Animation team were brilliant with the children and kept them entertained for hours. The Mini disco was a must do for all of them! We were AI, which gave free access to the Aqua park next door. I'm quite surprised the Hotel does not promote this further on the website as it provided many hours of fun.
All in all this was a wonderful holiday and would highly recommend as an excellent family Hotel. Many thanks to all the staff.

Thank you very much for your lovely review.

Report response as inappropriateThank you. We appreciate your input.
This response is the subjective opinion of the management representative and not of TripAdvisor LLC
crystalHC2021
1
Reviewed 4 August 2021
Could be fantastic

We stayed in an apartment which was fabulous. The size, the facilities, and so convenient to get to the pool, restaurant, bar etc. Just perfect for the current climate. It was also great how there were cleaning supplies in the room, and plenty of towels and beach towels included. We booked the splash world package but I don’t think all guests did, this was excellent and we really enjoyed it, as part of the package it was a perfect addition, however I wouldn’t have wanted to pay full price entry for such a small waterpark if it hadn’t been part of the holiday. In terms of what could be improved: the restaurant needs to cover the food, I am vegetarian but could only eat the salad on the first night because it always had fly’s on it after that, as the week went on there were flys on lots of food items and we chose to eat out a lot because of this. It would be nice to see meat and non meat items separately to make sure the wrong spoons etc aren’t used in multiple dishes and to make choosing food easier. Vegetarian options were often wrongly labelled for example tofu curry was not tofu, and the veggie options were minimal. We spoke to other people and it had supposedly been better before we got there in terms of choice and cleanliness so I don’t know if there was a staff change. One lunch time I burned my arm trying to get pizza and the 2 female chefs in blue laughed, thankfully a waitress who was lovely and helpful went to get me some ice. The entertainment needs to be improved, karaoke was nearly every other day and the queues for the bar should be inside because you can’t see the entertainment because of the queues if you sit on the side nearest the bar. Also the young gentleman who does entertainment in the day should ask people would they like to do aqua aerobics as he was asking people are you waiting to dance when they were sunbathing and everyone was telling him no because they weren’t waiting to dance.
The pool needs to be filtered, one young girl turned green from head to toe on a couple of days, and my own child came out with rashes. This was the top pool closest to reception. The bottom pool was not filtered either and there was suncream floating on the top in areas. This could have been cleaned manually if there was a filter issue. Also, a couple near enough having sex in a pool with children in during the day and neither the lifeguard or entertainment staff did anything about it, I had to tell them to stop which they did. All the parents looked horrified that nothing was being done. Other than that, the staff were helpful and it is a great hotel in a great resort, it just needs tweaks to make it so much better which could easily be achieved. We still had a really good time, the resort is lovely and feels safe in the current climate. We would go back but I would book the self catering option.

Thank you very much for your review and your observations, they are very useful to us to continue to improve and grow.

Report response as inappropriateThank you. We appreciate your input.
This response is the subjective opinion of the management representative and not of TripAdvisor LLC
buzzybee1502manc
1
Reviewed 4 August 2021
GREAT HOLIDAY

We arrived here on 24.07.2021, I was dreading it after reading the recent reviews. We tried to change the hotel but couldn't as it was less than 14 days to travel. I have to say I'm glad we didn't change it.
On arrival we waited to be checked in, there was a que but that was because there was a lot on our arrival coach. The receptionist was nice and polite, she went through how we find out about times for the pool, food bar etc. Arriving in the rooms 204-205 there were very clean, small but why do you need a massive space when your sleeping and changing in there.
The food was your typical all-inclusive food, we never had any issues with the temperature of the food nor choice....not always what we would like but like i say it's your typical all-inclusive food. Drinks were fine, in small cups but that was fine for us....can't be too picky about a cup!
The staff were all lovely and helpful. Entertainment was ok, if you want something out of this world then stay in a 6* hotel.
We stayed at the small pool throughout our weeks stay and there was always space, the bigger pool seemed busier but always looked like there was room.
The kids absolutely loved it and that's all that's mattered for us.
The area is quite but a short walk and there is some lovely bars and restaurants about. Unfortunately it looks like COVID has taken a toll on some bars as they are now closed down.
The beach is a 15 min walk from the hotel and is lovely, a little hide cove which was gorgeous...even if i hate the beach.
I would 100% bring my family back.

Thank you very much for your review. We are glad you enjoyed your holiday.

Report response as inappropriateThank you. We appreciate your input.
This response is the subjective opinion of the management representative and not of TripAdvisor LLC
HLW76
Lincoln, United Kingdom
58
Reviewed 2 August 2021 via mobile
Please don’t worry

This is just a quick review on day 3 to reassure people coming to stay at this hotel. I was worried about staying here after reading some of the reviews. The hotel is quiet as is the surrounding area. It is also clean and there are people constantly cleaning. The pools are clean and are cleaned every day. The food is at you expect at an all inclusive, plenty of choice not always piping hot unless they have just finished cooking it but this is often a problem at all inclusive. The reception staff are friendly and helpful too. The hotel and area feels Covid safe, actually more so than in England sometimes. On the whole, all is well here and it is lovely to have a break in the sunshine so please don’t worry.

Thank you very much for your lovely review. It is great to know that you are enjoying your stay.

Report response as inappropriateThank you. We appreciate your input.
This response is the subjective opinion of the management representative and not of TripAdvisor LLC
View more reviews
PreviousNext
123…
<script type='text/javascript' crossorigin='ano