Dinner is a tough choice as Laetitia is a brilliant cook, fresh fish, Santo beef, or lobster when available is all beautifully cooked with local sauces and spices. We tried other food nearby but found Laetitia's cooking the BEST and also best value.
Back to the bungalow which has everything you could need, comfortable beds with mosquito nets, freshwater refreshing shower and flushing toilets, solar powered lighting and usb ports if you want to charge your phone or device. Their is perfect digicel reception but I would strongly recommend a technology detox and leave your phone in your bag turned off! Fall asleep to the sound of the tide moving in and out and gentle waves lapping the shore - you feel you can touch it from bed as you drift into a perfect sleep.
Get away from your busy life for a few days and just soak in all this beautiful area and people have to offer. Pascal and his family shared a traditional Sunday feast with us and the other guests during our stay. They surprised us with this and would not take any payment we offered, a perfect long lunch with traditional foods beautiful local people and Vanuatu string band music - Perfect!

Our young daughter cried & cried when it was time to leave. TripAdvisor for six year olds 10 minutes or more crying on departure = 5 star rating!

I should point out from the previous review from KerrieCC I was in the car with Pascal as he offered to drive me to Luganville free of charge as he had done once before to top up on supplies when we got a flat tyre. At no time did I feel unsafe on this trip or any other time in a car with Pascal. Having the complete misfortune of listening to your non stop whinging on that drive perhaps stay in Melbourne and leave the good hard working, generous, honest, caring people of Vanuatu alone.

We are planning a return visit to Hideaway Paradise Beach Bungalows next year.More

Show less
Room tip: All beachfront, all beautiful
See all 5 reviews
Payments made by partners impact the order of prices displayed. Room types may vary.
Nearby Hotels 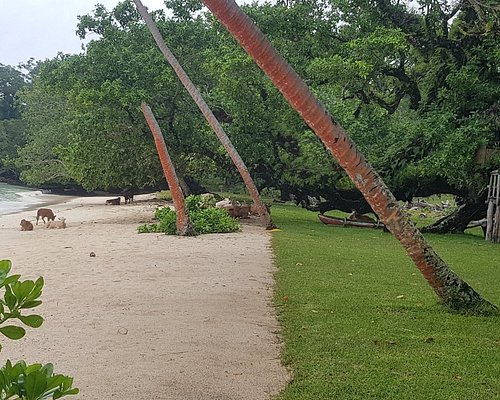 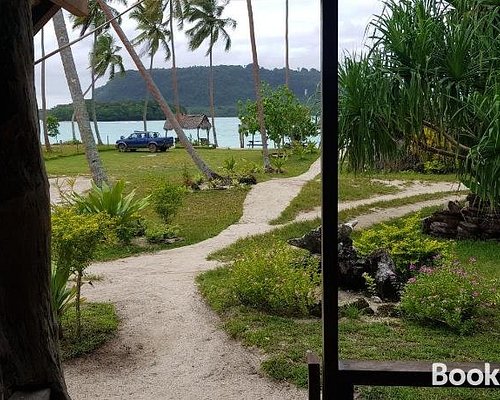 Hideaway bungalows offers a nature experience- bungalows in trees, sitting over water, on a beautiful peninsula,solar power, some digicel connections the peninsula if you have a SIM card.

The advertising in all online aspects about location is misleading though. On the maps Hideaway is shown to be located on the main beachfront in Port Olry, however it is not.

Port Olry Beach is 3kms North, with a long road off Pascal’s property to meet the main road.

As a solo traveller, I spoke with Pascal prior to my trip about location and was assured that the town was close by and near the other beach front accommodations- which it is if you have your own transport to drive to actual Port Olry.

Pascal picked me up from my previous accom and was on his way to town anyway, so I had time to get supplies (water and snacks and money) as there are no ATM’s outside of Luganville.

At this time he demanded I pay him for 2 weeks accommodation as well as airport transfers (5000 vuv to his property) then (7000 vuv to the airport). He had a calculator out and I felt cornered into this transaction with many excuses including “I need the money to put it in the bank”.

Very reluctantly and feeling this was wrong, I paid Pascal up front. Lesson number 1. Don’t pay until your happy with your decision and have seen the property, and even then pay on checkout after predetermining your fee. (Unless u booked a couple of nights online).

When we arrived I saw that Hideaway Bungalows were indeed something special, but were not located on the long stretched out white sandy beach as shown on maps on booking.com or trip advisor or facebook.

After a couple of days Pascal drove me to Port Olry. Given this is the location I thought I had booked I asked for a refund so I could spend some time on the wide open beach. Hideaway offers lovely snorkelling, but was not what I was after for a two week trip.

Pascal assured me he would arrange a booking for Port Olry for the second week of my stay. This was after an uncomfortable day of discussing money. The night before I was due to leave he informed me there were no vacancies. This turned out to be untrue as he had only checked his families property and there are others. I at this stage demanded a refund which he was not happy about claiming he “had no money” and at every point tried to withhold my money, very argumentative.

He did not return my airport taxi fare.

Pascal’s extended family, wife and kids are beautiful, and it felt like a cosy safe place for a female traveller. The food was healthy and nicely cooked. The bungalows island basic (not for resort seeking people).

I arranged my own accommodation on the beachfront in Port Olry and learned that not all business in Santo see dollar signs when they see tourists. Pascal owed me a nights accom, and scared me when knocking on my new residence door after 8pm at night to return this.

He maintained an argumentative state saying “if he could have recorded me I said .....”. I firmly said “No. I told you I had 2 weeks holidays, I wanted to be on the main beach walking distance to town, and that I did not want to pay before I even saw the property”, and also reminded him I was on a much needed holiday and his behaviour and actions were upsetting me and removing my freedom of choice, as I had never wanted to pay him so much money sight unseen.

Pascal insisted upon retaining my airport trip money (approx $100 AUD for a 50km drive). He had another man with him and arrived 1hr early, rushing me along as the man “had a meeting”.
I had arranged a pick up time and visit to Nanda Blue with him on my way to the airport. He drove at breakneck speeds on a narrow highway, overtaking slower cars and overtaking on corners at over 100km/hr. I told him I felt sick and asked him to slow down. He did not. On a flat stretch of road after a huge bang the car swerved and he was able to control it to a halt, luckily no corners or oncoming traffic,as the back tyre on my side blew up.

He did not check if the other three passengers were ok, and proceeded to change his tyre with his friend who had a “meeting”.

I asked for a partial refund to go the last section to the airport. He said “I have no money”and disappeared under the car. I removed my belongings and hailed the next taxi-who took pity upon my circumstances and gave me a fair rate. As I was getting in Pascal approached the taxi and asked how much MONEY I was paying. At this stage I told him to move away and mind his own business. Turns out Santo is a small island and the taxi driver knew Pascal.

I truly hope Pascal learns to curb his focus on money, as his property and personality has a unique offering and potential to be something special.

Whilst he was building during my first week there was significant noise that went from dawn to dusk so at times I felt trapped with noise and location when trying to relax and enjoy the beauty around me.

His wife Letitia and 3 lovely kids and his brother Harry made up for some of Pascal’s behaviour. I truly hope he learns from this that tourists on holiday do not want to be coerced into paying, and having their freedom taken by multiple arguments as Pascal does not like to give back money.

Perhaps for a couple of nights, but on my terms. Paying at the end of my stay, and arranging alternate transportation.

I do apologise for this honest review Pascal, but this information would have been useful to me as a solo female traveller to reduce the distress caused by you twisting my words and arguing over money constantly.

This review is the subjective opinion of a TripAdvisor member and not of TripAdvisor LLC
876russellc
Geelong, Australia
4712
Reviewed 25 September 2019 via mobile
I Found My Piece of Paradise

If you want a genuine island experience then Hideaway is for you. Warning: The showers are cold water. There is no Wi-Fi. There is only solar electrical power - no mains. In many ways, these things proved positives for me but, if you can't do without these luxuries even for a few days, then stay at a resort with them.
Pascal and his family provided a wonderful eight day experience and I thank them for it. Hideaway's location is relatively remote and as perfect as it could be. There is spectacular scenery in every direction including a nearby island. There is a protected snorkelling lagoon that resembles an aquarium along with a few other spots that require only average snorkelling ability to enjoy. The range of coral is in every case as good as anywhere I have been. There's lots of fish and even the odd turtle.
The food provided at breakfast - complimentary - and at the restaurant for dinner is another highlight. Breakfast is plentiful - eggs, toast and a variety of fresh fruit. For dinner, the fish, beef, chicken and coconut crab come perfectly cooked and with utterly delicious sauces. I suggest you bring only some snack foods for lunch but I rarely needed much more than the breakfast to get me through the day.
Pascal is always ready to provide assistance with bookings and transport to Santo's various places of interest. I can highly recommend the Matavula River and Blue Hole kayaking tour but there are many other activities from which to choose.
However, if you just wish to relax with a book and enjoy the beauty of the place, that is good too. There's no better spot for it.
Pascal is adding to Hideaway's accommodation and is keen to improve its facilities and service. I will be back to enjoy this perfect place next year.

This review is the subjective opinion of a TripAdvisor member and not of TripAdvisor LLC
JRWBmel
Port Vila, Vanuatu
182
Reviewed 22 July 2019
A wonderful place!

Pascal and his family are great host on this little slice of the Garden of Eden! The rustic bungalows are fun and have beautiful views over the water. Meals were really nice, with a good breakfast each day. The Snorkelling here is truly outstanding with dramatic coral , a good range of fish and even a turtle or two. And all straight off one of the three beaches right at the resort. We will be back!