US$79
View Deal
Hotels.comUS$79
Booking.comUS$80
eDreamsUS$80
TravelocityUS$79
Orbitz.comUS$79
CheapTicketsUS$79
View all 13 deals
Prices are provided by our partners, and reflect total costs of the stay, including all taxes and fees known to our partners. Please see our partners for more details.
Payments made by partners impact the order of prices displayed. Room types may vary.
BruceV979
Toowoomba, Australia
3046

We had a brief visit to the Beachfront Resort for lunch. It was very very good. Our friends raved about the fish and chips, the beer batter must have been made on “Tusker”. The grilled dog tooth tuna was top class and the fish curry was very tender and flavorsome. If you are on Santo you must eat here.More

Thank you for your complementary review which has been passed to the duty Chef. Please come again.

Report response as inappropriateThank you. We appreciate your input.
This response is the subjective opinion of the management representative and not of TripAdvisor LLC
See all 162 reviews
Payments made by partners impact the order of prices displayed. Room types may vary.
Nearby Hotels 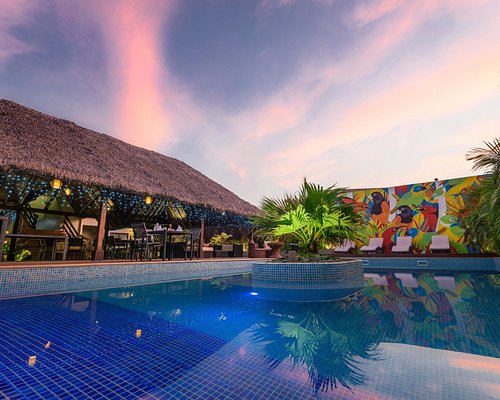 Breakfast included
The Espiritu
US$126

Hotels.com
View Deal
Pay up to 12X
Expedia.com
US$125
Travelocity
US$125
Orbitz.com
US$125
View all 10 deals from US$125
63 reviews
1.5 km from Beachfront Resort
We compared the lowest prices from 10 websites
Tropicana Motel & Backpackers
US$52

Rooms are spacious and clean. Breakfasts are included and are quite average. These could be improved. Dinners are available in the restaurant but are not included. Food is good but nothing special. Dining staff are friendly and lovely. There are some water equipment available but these, too, need some upgrades. Santa is lovely, though, and quite unspoiled.

Many thanks for your review and we are pleased you enjoyed your visit to Santo.

Report response as inappropriateThank you. We appreciate your input.
This response is the subjective opinion of the management representative and not of TripAdvisor LLC
Robert d
Sydney
3514
Reviewed 8 November 2019
Disingenuous management

The resort is quite nice and, providing you book online and have a confirmed deal, this is a good place to stay, BUT....

1. Book online as you cannot trust management to honour any commitment unless it's in writing, and even then ....
2. If management promises a refund, don’t believe them. It won’t happen.

We stayed for one night as the other accommodation we had previously booked was unavailable for the first night in Luganville. After flying into Luganville I made a quick check online with Booking.com and found there were two "Starfish" rooms available at the Beachfront Resort. Rather than book through the online provider we presented ourselves 10 minutes later at the hotel and requested the "Starfish" room which I had seen online just minutes earlier for AUD 88.84. I was assured that the rate charged would be the same. In the morning I was presented with a room charge of 8,000 vatu (about $104) by the desk clerk. When I queried this charge I was told by a person, who I now know was the manager, that the charge matched the Booking.com rate. I then opened the app on my phone and handed it to the desk clerk who took it and showed it to the manager. He just snorted that the rate was $104 when the rate on my phone clearly showed the lower rate.

Following some email exchanges, which were initiated by the manager, I was promised a refund of the difference. He wrote in an email “Please don’t bother coming to the office – it’ll be at the bar – longer opening hours.”

A few days later I went to the bar at Beachfront Resort to collect my refund. The bar staff knew nothing about the refund and, after they checked at the office, asked if I could come back some other time.

The resort was out of my way so I sent an email (25 September) providing bank account details for the refund. I sent a follow up email on 1 November reiterating the refund request. These emails have been met with a stony silence even though previous emails were answered. There has been ample opportunity for a refund to be made and it is quite clear to me that a refund will never be made.

Conclusion: Good place to stay, but don’t trust the manager.

This review content is a load of absolute rubbish. It is also the second review posted by this person on this issue. I understand his first review was taken off line. This guest stayed one night and tried to get a Booking.com special "genius" discount without booking through Booking.com. He expected this resort to match the Booking.com so called "genius" discount which is only available by making the booking through Booking.com. His little scam was discovered by our resort manager. This guest was not acting in the best interests of Booking.com or this resort and was trying to profit without sticking to the rules.

Report response as inappropriateThank you. We appreciate your input.
This response is the subjective opinion of the management representative and not of TripAdvisor LLC
lisarH2116IB
Buninyong, Australia
23
Reviewed 17 September 2019
Perfect

I was in Santo for a work trip and based myself at Beachfront Resort. It was excellent. Staff could not have been more professional, welcoming and accommodating. Wifi was reliable, which I needed to work in the evening. Reasonably quick walk into town, or affordable taxi rides if needed.

Food was good and the resort hosted had two dinners for high level government official while I was there - which they handled in such a way that us 'ordinary' guests were still made to feel welcome and looked after.

Thank you for your very complementary review.

You were here at a very busy time as Santo is seeing a lot of activity with new roads and other infrastructure projects underway which will make it easy to access more remote locations on the island.

Once completed visitors will be able to go to many interesting places via sealed roads and bridges which previously have only been accessible to the most intrepid of adventurers.

Of course these big occasions are celebrated by Heads of Government and visiting VIP's and we are pleased that our staff looked after you and that you enjoyed the official occasions.

We thank you for your kind words and hope you come back again soon.

Report response as inappropriateThank you. We appreciate your input.
This response is the subjective opinion of the management representative and not of TripAdvisor LLC
Janigel
Kapiti Coast, New Zealand
12728
Reviewed 16 August 2019 via mobile
Dinner

Excellent venue :-))
Excellent food :-))
Friendly staff :-))
Lovely place for dinner - would thoroughly recommend to others
Right on the beachfront and a fabulous swimming pool too.
Great accommodation we would stay here if we returned to Espiritu Santo :-)))

Thank you for your very complementary review. We are delighted that you enjoyed visiting Beachfront Resort. We look forward to your next visit.

Report response as inappropriateThank you. We appreciate your input.
This response is the subjective opinion of the management representative and not of TripAdvisor LLC
SoloAus
Honiara
6335
Reviewed 4 July 2019 via mobile
Good location nice staff

Very clean, nice pool area, breakfast is simple but more than enough. WiFi is available at the pool area and works well. The staff are super friendly.
Taxis and buses service the area ascend it's only a five minute walk to the marine school.

Thank you for your review and we are happy that you enjoyed your stay.
Look forward to your return to Santo.

Report response as inappropriateThank you. We appreciate your input.
This response is the subjective opinion of the management representative and not of TripAdvisor LLC
View more reviews
PreviousNext
123…27