Wonderful hosts and a great place to... - The Stables part of 17Cent Water Mill

Review of The Stables part of 17Cent Water Mill 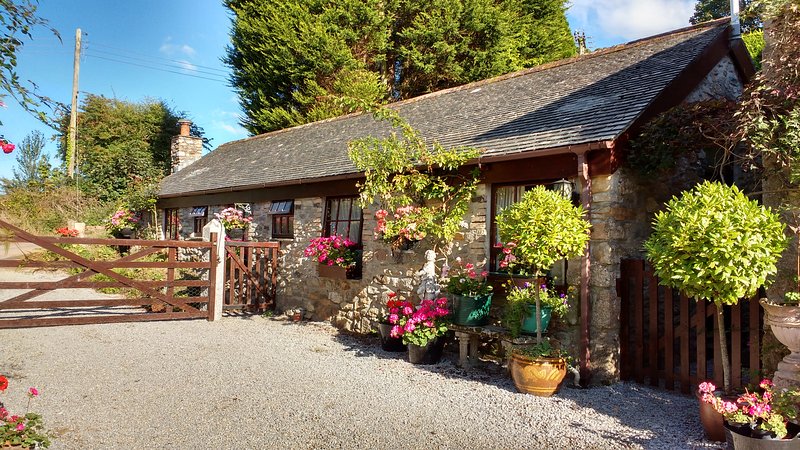 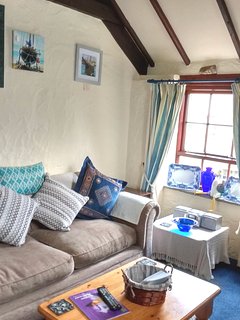 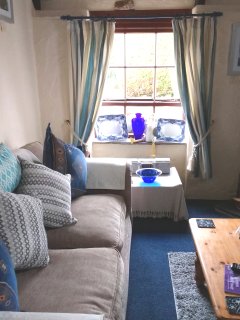 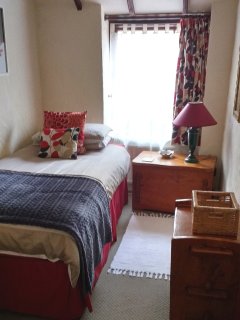 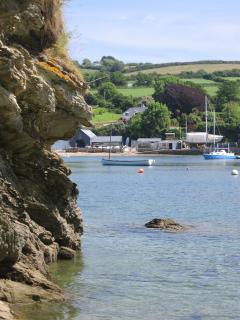 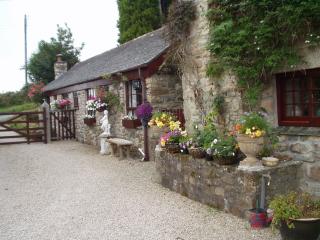 Very good - based on 7 reviews
Write a Review

Have stayed at the Stables 3 times now with my wife and elderly mother and would thoroughly recommend it to anyone. We've also stayed at the adjacent 2 storey cottage.
Alan and Suzy (not forgetting pet dog Satchmo) are wonderful hosts - very friendly and helpful with excellent knowledge of the area and places to eat. We always look forward to their Cornish Cream Tea on our arrival.
The location is excellent - quiet, off the beaten track but close enough to Truro, Falmouth and other tourist attractions. The local area is full of interest, particularly for those wanting to explore Cornwall's industrial heritage. It's also half way between north and south coasts so it's easy to organise day trips to suit the differing weather conditions.
The cottage itself is very comfortable, full of character and well equipped. Being on one level, it's ideal for those who find stairs difficult.
We're already looking forward to our next visit.

Date of stay: July 2017
Would you recommend this hotel to a friend?   Yes.
Was this review helpful? Yes
This review is the subjective opinion of a TripAdvisor member and not of TripAdvisor LLC
We have known John & his family for many years as they are regular guests at Hicks Mill, they are part of our extended family! The perfect guests, charming people & fun to have around, We shall always welcome them with open arms & look forward to seeing them all again soon!
Suzy
This response is the subjective opinion of the management representative and not of TripAdvisor LLC
Problem with this review? Thank you. We appreciate your input.

Had a lovely relaxing week at The Stables. The cottage has everything you need for a great stay. Suzy & Alan were fab hosts and were very welcoming with a bottle of wine & a cream tea. Lots to see and so in the area, loved Trebah Gardens & St Mawes

Date of stay: July 2017
Would you recommend this hotel to a friend?   Yes.
Was this review helpful? Yes
This review is the subjective opinion of a TripAdvisor member and not of TripAdvisor LLC
Julie & her family were the perfect guests, it was a pleasure to be their hosts. We hope they'll come and stay at our lovely mill again in the near future!
Suzy
This response is the subjective opinion of the management representative and not of TripAdvisor LLC
Problem with this review? Thank you. We appreciate your input.

We have now stayed at this location on four previous occasions - three times in the Mill Cottage and lastly in The Stables
Both cottages are extremely comfortable, well-appointed and within easy reach of all the local beaches, good restaurants and towns
We enjoyed our visits to the Eden Project, Minack Theatre, Lost Gardens of Heligan, Lizard Point and all the beautifully picturesque fishing villages which are far too numerous to name
Alan & Suzy are the perfect hosts, always on hand to help and advise with your daily planning and it is definitely an absolute pleasure to visit again which, no doubt, we shall be so doing quite soon !!

Date of stay: May 2017
Would you recommend this hotel to a friend?   Yes.
Was this review helpful? Yes
This review is the subjective opinion of a TripAdvisor member and not of TripAdvisor LLC
Ann & Terry are regulars here at Hicks Mill, almost family! They are the perfect guests and such fun to have around, we always look forward to their visit & hope to see them again soon!
Suzy
This response is the subjective opinion of the management representative and not of TripAdvisor LLC
Problem with this review? Thank you. We appreciate your input.

I booked this cottage for my sister in law and I to spend a quiet week in Cornwall whilst my husband was sailing. The reviews were good and I had hoped for a relaxed stay. However, we turned up at the time we were told 3.30 but no one was there so we went away again and returned a little later, still no one around. By this time having driven over 7 hours and it was now pouring with rain we were not happy. Suzy had told me she was going into hospital and would not be there when we arrived but that we would be ‘looked after’ and she would see us later in the week. We knocked on every door possible but no one was around. I tried ringing but there is no phone signal at all at the complex. In desperation, we tried the door of the cottage we had booked and it was unlocked so we let ourselves in, despite the instruction telling us we would be met and shown the property and told where to park etc but by this time we were totally soak and tired. There were no instructions as to how to turn on heat or anything but at least we were out of the rain. The ‘cream tea’ was there in terms of a packet of supermarket scones on the table and some butter jam and cream in the fridge. After having those and a cup of tea the rain stopped and we decided to take a walk to find out if there was a public telephone where we could advise our family that we had arrived safely. We found that down the lane we could get a weak phone signal so I telephoned the owners but got an answer machine, I left a message to ask them to come at some point and show us how to put some heat on and how to connect to the Wi-Fi etc, I also mentioned how uncomfortable we felt having let ourselves in. At about 9pm Alan knocked and said he had been in the pub when we arrived because Suzy had been in hospital for two days and he wanted some company. I have no problem with that but I think it would have been nice had he just popped back at the appointed time to welcome us. The cottage is nice and well-appointed however some points worth knowing before you book. The Wi-Fi is only available in the kitchen of the cottage not the living room or bedrooms. There is no mobile phone signal at all. The Garden is up a high bank and is accessed by some very worn and old steps with no handrail so any plans we had to take our tea or a glass of something and relax in the garden were not possible because getting up the steps was bad enough but getting down was even worse, even with both hands free. The shower also has problems if you have any mobility issues as there is a 30cm (1ft) step in and out. Finally, for me the parking situation is far from ideal. There is a place to put your car but it is tight and getting out is very tight. Because you are situated on a steep single track road backing out would be suicide so you need to do a multiple turn reverse into the owners’ area opening their gate after having made sure their dog is not out, before you then do a hill start turn out on to the lane. Nothing is within walking distance the nearest pub is a 30-minute walk up the said steep single track road so is the nearest shop. All of this was not what we expected, the difficult access, the need to drive for anything even a pint of milk or to post a card together with the impossibly difficult access to the garden the lack of any phone signal and limited internet access meant this was not for us. As for the welcome I am sure it is better when Suzy is around we didn’t get the promised flowers or chocolates when I mentioned the 'no chocs' to Alan he said he couldn’t be bothered but had left us some biscuits instead…….. says it all - such a shame.

Date of stay: June 2017
Would you recommend this hotel to a friend?   No.
Was this review helpful? Yes
This review is the subjective opinion of a TripAdvisor member and not of TripAdvisor LLC
Prior to their arrival I had contacted the guests telling them that the cottage would be open & everything laid out. There is an instruction sheet in the cottage stating how to use the hourly switch on the heating, wifi code, distance to local pub, post office & supermarkets. Unfortunately, when the guests arrived my husband was visiting me in hospital as I was recovering from major surgery. Cream tea had been laid out, six all butter sultana scones along with a bottle of wine & a box of Fox's mixed choc. biscuits! However, on returning home and having checked the voicemail, my husband went to check on the guests. He helped them with booking restaurants & ,to park their car. The parking space adjacent to the cottage measures 12ftX20, big enough to park a van. It is easier if you are able to reverse a vehichle, 2 cars can easily pass on the lane. My husband also showed the ladies how to operate the fan heater which has just an on/off switch and also opened a bottle of Prosecco, hopefully settling them in. He also asked if there was anything else he could help them with. Being in the countryside phone signals do vary, but most can be obtained within 30ft of the cottage. Good wifi is available in the kitchen area, this is for internet security so that no-one out in the road can hack into the guests computors or phones.
The Stables forms part of a 17th Century grade 2 listed Watermill in an area of outstanding natural beauty, a quiet countryside location only 10 mins from Truro & Falmouth & 1mile from the village of Perranwell Station (2 mins by car). A fantastic hub for easy access to the north & south coasts. Hence its appeal for those wanting a quiet relaxing holiday. The old granite steps (also listed) to the terrace, form part of this charm. For those with slight disabilities we have seating in our lovely courtyard and provide a platform for the shower cubicle on request.
We pride ourselves in the many superb reviews for our hospitality & our detailed attention to our customers, this being the first negative report in 15 years of trading. Maybe this guest might have found a town location more suitable.
This response is the subjective opinion of the management representative and not of TripAdvisor LLC
Problem with this review? Thank you. We appreciate your input.
Previous Next
1 2
Updating list...
Do you own a holiday rental? List it here.

Looking for a place to stay in Perranwell Station?
View all 6 holiday rentals