StayForLong
Prices are provided by our partners, and reflect total costs of the stay, including all taxes and fees known to our partners. Please see our partners for more details.
Payments made by partners impact the order of prices displayed. Room types may vary.
JypeWasHere
Vantaa, Finland
19370

Hotel is located near to the beach and nearest restaurant (off season) within 2 minute walk (La Mar). Rooms were big and cozy but beds unfortunately were not comfortable. We stayed here 4 nights. Free Wi-fi was ok and there was free parking space available.

The bathroom had a funny smell. There was a bathtube, shower stall and toiletteries. WC leaked a bit.

AC worked very well but the fridge´s fan keeped some noice time to time. TV was a bit old and was not a flat screen model. The view from the balkony was to the parking place.

For some reason the was no cleaning in the room during this 4 days we stayed there.
We were most likely only guests in that section of the hotel.
Overall ok experience for the money we payed for the room.More

Dear JypeWasHere, Thank you for sharing with us your experience!We do our best to improve our services everyday so we are pleased to hear your opinion. It will be pleasure for us to welcome you again as our guest! Kind Regards, The Clara Apart hotel & Residence Team

Report response as inappropriateThank you. We appreciate your input.
This response is the subjective opinion of the management representative and not of TripAdvisor LLC
See all 53 reviews
Payments made by partners impact the order of prices displayed. Room types may vary.
Nearby Hotels 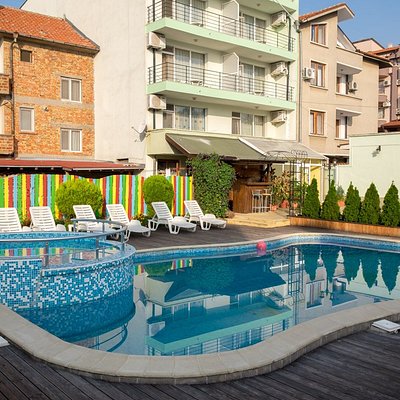 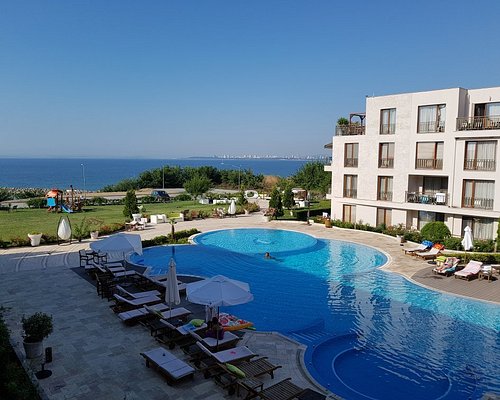 Expedia.com
View deal
Hotels.com
Booking.com
US$82
eDreams
US$82
View all 8 deals from US$82
21 reviews
0.4 km from The Clara Aparthotel & Residence
We compared the lowest prices from 8 websites We booked this hotel for just one night due to it being close to the airport, knowing that we would be arriving late. We walked from he airport, which is totally doable, but the hotel is marked in the wrong place on Apple maps so beware if following them. If you are, keep walking down the road for an extra ten minutes or so from the location marked and you will see it on your right.
The room was spacious with some good facilities such as a fridge, microwave, hob and sink. The bed, however, had the most uncomfortable mattress imaginable. It felt like I was laying on rocky ground! That along with the faint smell of sewage in the room when we arrived meant that we didn’t have the most restful sleep despite it being nice and quiet.
Breakfast was a buffet. Some cereals, cold meats a hot cart with some fried food and eggs. It tasted ok and filled a hole but wasn’t particularly nice.
The hotel has a bar for quests with a pool table but we went out to a nice place down the road.
When we were there at the end of August it was surprisingly quiet so nobody was in the pool, but it looked pleasant enough, with plenty of sun loungers around it.
The hotel was ok for a one night stay so that we could stop quickly by the airport but I wouldn’t have wanted to spend a week on holiday there.

Thank you for sharing with us your experience!We do our best to improve our services everyday so we are pleased to hear your opinion.
Kind Regards, The Clara Apart hotel & Residence Team

Report response as inappropriateThank you. We appreciate your input.
This response is the subjective opinion of the management representative and not of TripAdvisor LLC
41kathleen2015
Bailieborough, Ireland
32
Reviewed 7 September 2017 via mobile
Ms Kathleen O'Reilly.

Great place for a family get away, lovely beach, great pool area. Restaurant and entertainment very good. Close to restaurants. Great bus service and within walking distance to Burgas Airport. Bus fare to Burgas 1 lev(50 cent). Would recommend this holiday to young and old alike. Great value for your euro.

Just returned from the Clara hotel, with husband and kids. Rooms were spotless on arrival and we gladly availed of the complimentary drinks and fresh crossiants staff had waiting. 5 leva can buy a kids breakfast which offers continental or full Irish. (Roughly 2.50 euro). The children loved every aspect of the hotel from the pool to the kids club. The teenagers quickly made new friends and could walk to the village or take a 5 min walk to the beach. Entertainment every night was amazing. We made many new friends and will return next year.

What a difference a year makes. This hotel and apartment has gone severally downhill. It's is not what it's seems. It is not self catering, food over priced (Irish prices), staff rude, management not willing to listen or help or support customers. The place even looks dirty balcony's, pool area, rooms, towels and bedding. Had to ask for room to be cleaned. They r charging for everything too- dirty towels r bedding pots,pans etc. Kids club OK but no change in games- same thing everyday. Kids lost interest. We were not happy at all. Will never return here at all and this doesn't bother the management and owners. A new management team that are hoteliers could make this place excellent and worthy 3 star hotel. At the moment I would not even rank it as a 1 star.

This review is the subjective opinion of a TripAdvisor member and not of TripAdvisor LLC
steve4424
Navan, Ireland
11
Reviewed 24 July 2017 via mobile
Class.

We stayed for 2 weeks and had a brilliant time. All of us really enjoyed our stay
The lads couldn't do enough for us .
Sean ,Cathal,Damien and Ian really couldn't have done more .
The kids had a ball and loved it . The entertainment team were brilliant .
The rooms are lovely the food is class and the bar is the place to enjoy yourself
Top place really enjoyed are stay
We will be returning .