Bill J wrote a review Jan 2022
3 contributions
Nine aggravating days on the MSC Seashore
9 days on the MSC Seashore. Buffet food the same every day. Looks good, but lacking in taste appeal. Their website is seriously disfunctional. After several fruitless days of trying, phone calls finally got the job done. Itinerary was boring. Nothing at the stops except massage parlors, trinkets and t-shirts, beach tours, or swim with the dolphins. Bartenders don't know how to fix drinks. They get old fast, and taste weak. Forget trying to find a quiet spot outside your cabin to read and relax. Their piped in music is everywhere, and the volume is way too much. Imagine having coffee on the deck at 6:30, and having to listen to "It's Your Thing." I was the only one on the pool deck, to watch the sunrise, but had to go down to try to get away from it. The worst thing was the Internet, or lack of it. On other cruises, you could buy an Internet plan for one device, disconnect it, and connect another device. Not on MSC...you have to buy a plan for every device. I shelled out almost $300 in nine days for way less than adequate service. I visited the service desk and Internet kiosk for several days, trying to figure out why I couldn't send photos through iMessage. They kept resetting the account, telling me to upgrade to the surf and stream package, but it never did work. I finally figured out that the ship has it blocked, because I could send photos fine when I got on wifi on shore in Jamaica. When I asked them about it, they said you could only send photos on iMessage if you were connected to the ship's expensive cellular plan. You could send photos by WhatsApp or Facebook messenger though. One of the Internet staff was extremely rude, and shouted incorrect info to me. I corrected him, over his refusal to listen, and a lady nearby thanked me because she said he had treated her like a piece of meat. Their private island, Ocean Cay, was a great place to play in the water, on the beach, grab some snacks, or relax. The ship was nice, cabin was nice, staff was good, it was great to only have 900 on board, the weight room was awesome, massage and sauna were good, other amenities were good, but all the above just took the fun out of it for me. I have cruised a lot, and never had issues with the Internet like that. Nice ship, but they just don't have their act together. No, I don't plan to sail with them again until they get things fixed.
Read more
Sail Date: January 2022
Cabin Type: Balcony
Type of Trip:
Destination: Caribbean
Cabin
Dining
Service
Pools & Sundecks
Onboard Activities
Entertainment
Value
This review is the subjective opinion of a Tripadvisor member and not of Tripadvisor LLC. Tripadvisor performs checks on reviews.
Helpful
Share
Scroll below for other great reviews 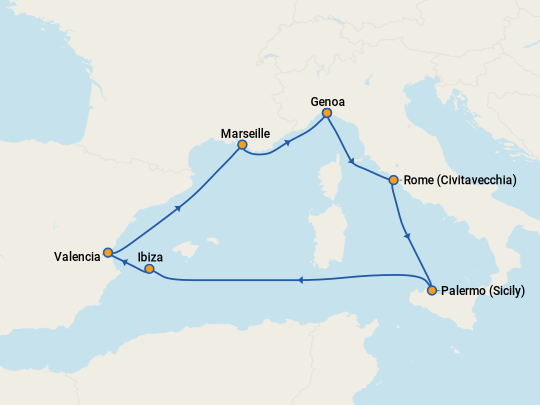 Itinerary
Prices are cruise only, per person, double occupancy, and are provided by our partners. Taxes, fees and port expenses are not included. Fuel supplements may apply. Availability of prices is subject to the supplier’s pricing availability.