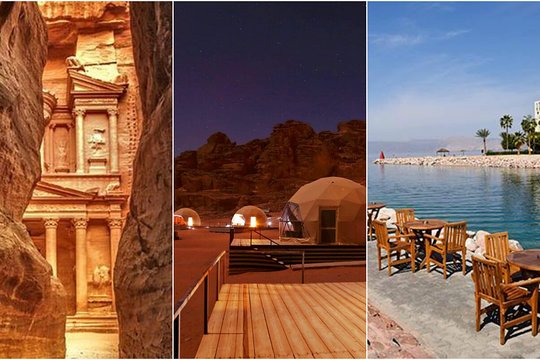 Select Date and Travellers
From
US$533.00
per group (up to 3)
Date
2 travellers
Free Cancellation up to 24 hours in advance
Low Price GuaranteeNo Booking Fees
Overview
What to Expect
Itinerary

Stop At: Siq, Petra - Wadi Musa Jordan
The 1.2km Siq, or canyon, with its narrow, vertical walls, is undeniably one of the highlights of Petra. The walk through this magical corridor, as it snakes its way towards the hidden city, is one full of anticipation for the wonders ahead – a point not wasted on the Nabataeans, who made the passage into a sacred way, punctuated with sites of spiritual significance.
Duration: 2 hours

Stop At: High Place of Sacrifice, Petra - Wadi Musa Jordan
The most accessible of Petra’s High Places, this well-preserved site was built atop Jebel Madbah with drains to channel the blood of sacrificial animals.
Duration: 15 minutes

Stop At: Monastery (Al Dayr), Petra - Wadi Musa Jordan
Hidden high in the hills, the Monastery is one of the legendary monuments of Petra. Similar in design to the Treasury but far bigger (50m wide and 45m high), it was built in the 3rd century BCE as a Nabataean tomb. It derives its name from the crosses carved on the inside walls, suggestive of its use as a church in Byzantine times. The ancient rock-cut path of more than 800 steps starts from the Basin Restaurant and follows the old processional route.
Duration: 30 minutes

Stop At: The Royal Tombs, Petra - Wadi Musa Jordan
Downhill from the Theatre, the wadi widens to create a larger thoroughfare. To the right, the great massif of Jebel Al Khubtha looms over the valley. Within its west-facing cliffs are burrowed some of the most impressive burial places in Petra, known collectively as the ‘Royal Tombs’. They look particularly stunning bathed in the golden light of sunset.
Duration: 20 minutes

Stop At: Al-Khazneh, Petra - Wadi Musa Jordan
Known locally as Al Khazneh, this tomb is where most visitors fall in love with Petra. The Hellenistic facade is an astonishing piece of craftsmanship. Although carved out of iron-laden sandstone to serve as a tomb for the Nabataean King Aretas III (c 100 BCE–CE 200), the Treasury derives its name from the story that an Egyptian pharaoh hid his treasure here (in the facade urn) while pursuing the Israelites.
Duration: 45 minutes

Stop At: Jebel Khazali, Wadi Rum Jordan
It's a Small size geocache, with difficulty of 2.5, terrain of 5. It's located in Jordan.This trip is not one of the popular route in Wadi Rum, but maybe the best canyoning way in this area.
Duration: 3 hours

Stop At: Burdah Rock Bridge, Wadi Rum Village, Jordan
Burdah rock bridge; Jabal Burdah is located in the southeast of the protected area. On the north ridge stands the 35 meter high Burdah rock bridge. It is considered one of the highest natural arches in the world. And one of the most spectacular sites in Wadi Rum.
Duration: 1 hour

Stop At: Aqaba Marine Park, Aqaba 77110 Jordan
his aquarium is part of the Aqaba Marine Science Station, although its location in the shadow of the ferry terminal doesn't make you feel particularly close to nature. Over a series of large and small tanks, you're introduced to the variety of fish and corals in the Gulf of Aqaba, and get a good picture of what you might see when snorkelling or scuba diving, from colourful parrotfish to reef sharks.
Duration: 2 hours

Write a review
About the operator

This tour has not yet been reviewed, but you can read what other travellers have to say about this operator.

Gunnstein
St. Petersburg, Russia
21
Horrible and careless driver
The driver was driving extremely fast and careless, the bus had summer tyres, and in the mountains there were…
Read more

Stelios
20
Happy with the service provided
I booked the ticket on the website of the company,the one way is 12 Jod and round trip is 18 Jod,you receive the…
Read more

Oscar Rosado Pacheco
Mexico
296
The cheapest and easiest way to move through Jordan
If you are in Amman and want to get your way around with a tight budget, this is for you. Busses from Amman to…
Read more

Dan B
51
Madaba tour
Tour takes you to all the spots but it's self guided. My issue is the one hour wasted at tourist traps at…
Read more

yolie5910
Brooklyn, New York
63
Amman Ajloun Jerash Amman
For the price one cannot complain much. Our driver was not able to communicate with the group, other than to …
Read more

Албена Г
30
Trip
The driver was kind and accurate and give us our time to see all. We see all the things and we feel very…
Read more